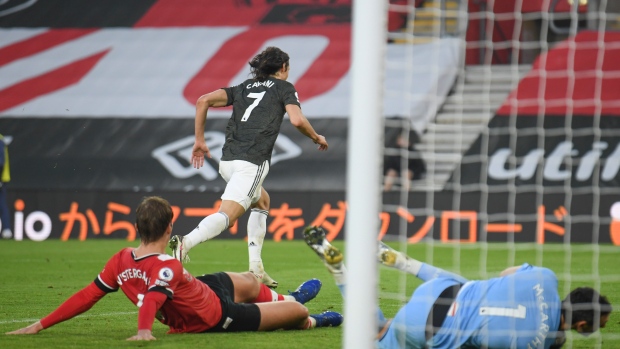 SOUTHAMPTON, England — Edinson Cavani completed Manchester United's comeback in stoppage time at Southampton on Sunday, heading in his second goal for a 3-2 win in the Premier League.

Jan Bednarek’s header and a free kick from James Ward-Prowse put Southampton on course for a first home league win against United since 2003.

But Ralph Hasenhuttl’s side squandered its two-goal lead as halftime introduction Cavani turned the match on its head, setting up Bruno Fernandes to begin the fightback in the 59th minute.

Cavani was proving a handful and got United's equalizer in the 74th minute. Goalkeeper Alex McCarthy punched a corner clear, and Fernandes’ deflected shot back into the box was headed home by Cavani.

As United pursued the winner, Cavani peeled away to meet Rashford's cross and beat McCarthy in the second minute of stoppage time.