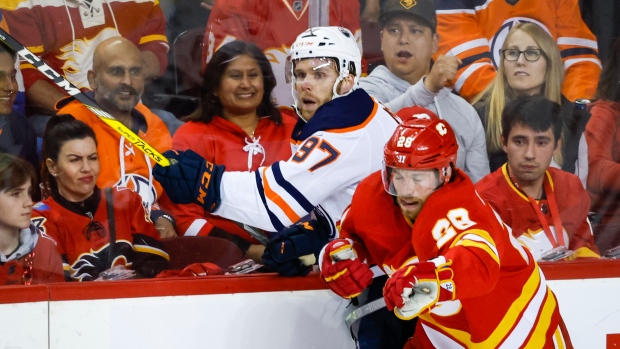 The Edmonton Oilers have overcome a pair of two goal deficits and head to the third period of Game 2 tied 3-3 with the Calgary Flames.

Forward Tyler Toffoli gave the Flames a 3-1 lead at 2:04 of the period, slapping home a power play goal to give the Flames their two-goal lead back.

Connor McDavid responded to cut into the Flames’ lead one minute later, undressing Jacob Markstrom and slipping the puck past the goaltender’s outstretched leg. It was McDavid’s fifth goal in his past five games.

With Michael Stone serving a double minor for high sticking, Evan Bouchard tied the game with 4:57 remaining in the period, blasting home a power play goal from the top of the circle to bring the score to 3-3.

Oilers’ goaltender Mike Smith stopped 11 shots in the second period and has made 21 saves through two periods.

The Flames lead the series 1-0 after winning Game 1 9-6 on Wednesday.