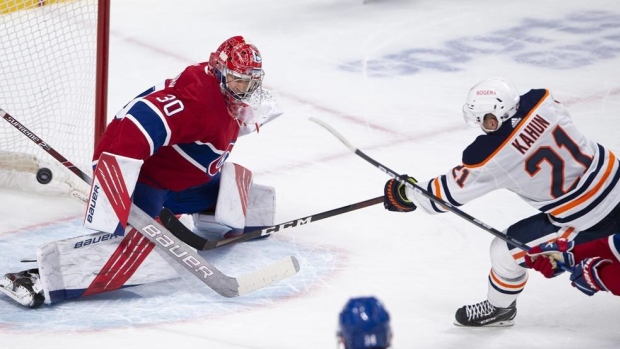 MONTREAL — The Montreal Canadiens can start thinking about playoffs, while the Edmonton Oilers aren't quite there yet following a 4-3 overtime win Wednesday over the Habs.

Edmonton's Dominik Kahun scored the first overtime winner of his career 27 seconds into the extra period on a feed from fellow-German Leon Draisaitl.

Kahun was surprised it was him, and not McDavid, sent out with Draisaitl in OT on Wednesday.

"Of course I was thinking my game was probably over," Kahun said. "When coach said I was going out with Drais I was a little bit surprised.

"I'm very happy for the opportunity and obviously very happy that it went that way."

Draisaitl with his 31st of the season, Alex Chaisson and Ryan Nugent-Hopkins also scored for Edmonton (35-18-2).

"Sloppy, nobody got hurt and we got two points, so other than that it was good," was Oilers head coach Dave Tippett's assessment of the game.

Edmonton caps the regular season Saturday at home against the Vancouver Canucks before facing the Winnipeg Jets in the playoffs. Series dates have yet to be announced.

"We've got one more game here to keep building and preparing for next week," Chiasson said. "Everyone that's going into Game 1, you want everyone to feel good about where they're at.

"That's what needs to happen to be successful."

McDavid had two assists for 104 points in 55 games this season, and Mike Smith made 26 saves for the win.

Tyson Barrie also had two assists to lead all NHL defenceman with 48 points in 55 games, with one more point than New York Rangers blue-liner Adam Fox.

Nick Suzuki scored twice and Cole Caufield had a goal and an assist for the Canadiens, who finished their regular season at 24-21-11 and face the division-topping Toronto Maple Leafs in the post-season.

The Canadiens went 16-16-6 under head coach Dominique Ducharme after Claude Julien was sacked in February.

Montreal secured the fourth and final playoff berth in the North Division with Monday's overtime point.

"I really believe that we will have time to prepare now for the playoffs," Ducharme said. "I think we're going to be stronger because of everything we went through this year."

Montreal played every second day in the month of April, including a pair of back-to-backs. The Canadiens finished with seven games in 12 days.

"I don't think any of us will ever go through a stretch of hockey like this again," Canadiens defenceman Ben Chiarot said. "Everything about this year has been unique.

"This last stretch has been exactly that, unique. A ton of hockey. We almost felt like we lived at the Bell Centre, lived at whatever game rink we were playing at.

"It was a lot of hockey. We're through it now. We get a nice break and get ready for playoffs."

The score was knotted 2-2 after the opening period.

Suzuki scored shorthanded at 9:58 of the first period for a 2-1 Montreal lead, but Nugent-Hopkins drew the Oilers even on the same power-play at 10:53.

Caufield scored his fourth goal of the season in his ninth NHL game just 1:58 after the opening faceoff. Chiasson countered for Edmonton at 8:35.