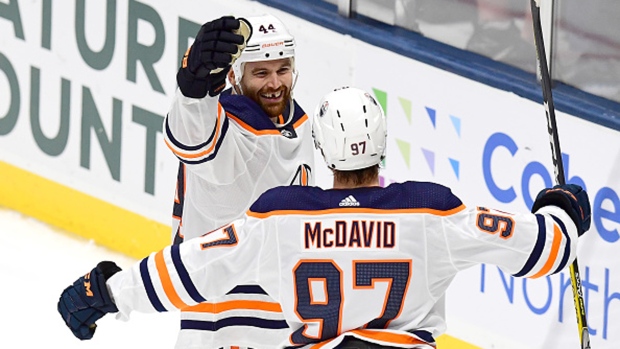 For Zack Kassian, rock bottom came on Oct. 4, 2015. It was a Sunday and he was summoned to Habs’ GM Marc Bergevin’s office at the Bell Centre in Montreal.

Two weeks earlier, Bergevin welcomed Kassian to the Canadiens ­– but with a stern warning.

“He was telling me that he was happy to have me, but I’d have to stay clean off the ice,” Kassian said. “He told me, ‘If you screw this up, you’re out of here.’ I knew that it was my last strike going into Montreal. But I was so out of it and deep into that lifestyle that I still didn’t really listen.”

Kassian didn’t even make it to the season opener.

Three days before he was supposed to play in his first game for his late father’s favourite team, a Ford F-350 loaned to Kassian by a local dealership smashed into a tree. The incident happened at around 6:30 a.m. on a Sunday morning after a long night of partying.

A woman was driving, according to police, but she was impaired and so was Kassian, who was injured in the passenger seat.

Kassian’s conversation with Bergevin after being discharged from the hospital was brief.

“He was a man of his word,” Kassian said. “He said, ‘I told you what was going to happen,’ and I accepted it. It was really tough. Marc gave me every opportunity. Two weeks later I was sitting in the exact same chair with a walking boot and a broken nose and essentially on my way out of town.”

Kassian was off to rehab in Malibu, Calif., his NHL future hanging in the balance.

“I burned a lot of my strikes,” Kassian said in a revealing interview last week. “That’s where it hit me. I think going to rehab and realizing all of that and the rock bottom of maybe never playing in the NHL again at age 24, that’s a pretty scary feeling.”

Fast-forward to 2019. Kassian has become one of hockey’s best redemption stories.

The Edmonton winger celebrated four years of sobriety earlier this month. He is off to the best start of his career with three goals and two assists for five points in six games for the surprising Oilers, where Kassian has played his way into an integral role on the top line with Connor McDavid and Leon Draisaitl.

“We’re really proud of him,” McDavid said. “It’s not easy to go through that and change your life around.”

Everything is falling into place for Kassian – on and off the ice. Kassian, now 28, and his wife, Cassandra, welcomed their daughter, Ellery, into the world last March. Ellery arrived as Kassian was putting the finishing touches on a career-best 15-goal season, which helped put hockey and life in proper perspective.

“It’s life-changing, especially having a girl,” the gap-toothed Kassian said, grinning. “It’s one of the best feelings in the world. When you have kids, life is so much bigger than yourself. You don’t really experience it until you’re holding her. It’s not just about you.

“You realize life’s bigger than hockey. You have a daughter. You grow older and more mature. You just get the outlook on life and how you’re supposed to live.”

For Kassian, it wasn’t so much that he didn’t know how to live the right way before rehab. He said doctors peeled back the onion in Malibu, dissecting his childhood in Windsor, Ont., after he lost his father, Mike, to a heart attack at the age of eight.

Kassian didn’t grow up with money. He was raised by his older brother, Mike Jr., who is 10 years his senior – and older sisters Amber and Stephanie – while his mother, Shirley, “worked her butt off to support us.”

“Obviously, you don’t want to lose your dad at a young age, but that stuff happens,” Kassian said. “That wasn’t the cause of my problems by any means. I don’t think that was a factor one bit.”

Instead, Kassian said his spiral into the nightlife world as a fast-rising hockey player was “one of those stories you hear all the time, until it happens to you.”

The hulking 6-foot-3 winger was picked 13th overall in the NHL Draft by Buffalo in 2009 and then returned to finish his junior career with the hometown Windsor Spitfires.

“I got drafted high, I started to make money and I thought I was invincible,” Kassian said. “It was one of those snowball effects where you start to get into the party scene and it took over my life for the majority of the beginning of my career.”

What started out as just alcohol morphed into more.

The NHL does not screen for recreational drug use, but word about Kassian’s habits quickly spread around the league.

“You become a high pick and you think everything’s going to be handed to you, but not in a cocky or arrogant way. You’re just young,” Kassian said. “And when you don’t see the big picture, you don’t realize how hard the NHL is. It’s a business first and foremost and we’re investments.

“If you treat your body like crap and it’s getting around the league that you like to drink and have too much fun, they’re going to slowly weed you out.”

That’s what happened, as Kassian bounced from Buffalo to Vancouver to Montreal, before ultimately weeding himself out.

“Something clicked,” Kassian said. “I don’t know exactly what it was, but I was sick of always hiding and wondering what’s going to happen to me, if they [the team] know what I’m doing. It comes to a point where you’re sick and tired of living that life.”

Kassian hit that milestone in rehab. In Dec. 2015, Peter Chiarelli and the Oilers took a chance on Kassian, acquiring him from the Canadiens in exchange for netminder Ben Scrivens.

“First you get your life turned around, then you get an opportunity,” Kassian said. “Peter Chiarelli, I can’t thank him enough.”

That it’s all come together, that Kassian has found his game as an effective NHL player, makes him think back to what his older brother, Mike, and his proud family had been telling him all along.

They aren’t surprised, because there has never been much of a question about Kassian as a hockey player.

“They told me it’s not so much hockey that’s hard for me; it’s just about staying on track off the ice. They’re right,” Kassian said. “That’s never been an issue. I work hard. I work out hard. I stay in shape. I love the game. I compete. It’s away from the rink that always seemed to get me in trouble. He always reminds me to stay on top of that stuff and the NHL part will take care of itself.”

Part of that now includes taking care of McDavid and Draisaitl.

“He’s a guy that makes my job easier,” McDavid said. “He’s a guy that opponents are intimidated by; they aren’t too sure what he’s going to do. I think that helps create space for guys like me and Leon, but he can play an offensive game as well. It’s a good fit.”

Coach Dave Tippett likes how Kassian “can keep the flies” off of two of the NHL’s brightest stars.

“He’s a big part of our team in there,” Tippett said, pointing toward the dressing room. “He’s a good player and good guy in the room. He’s a big strong guy that’s had some challenges, but he’s come through it.”

Kassian doesn’t have an app on his phone that counts how many days he’s been sober. He doesn’t want to get ahead of himself.

“I just live,” he says. “You get so overwhelmed in pro sports and just life in general; this has taught me to not sweat the small things and just live life one day at a time.”

He doesn’t need many reminders. Kassian has plenty more reasons to stay on the straight and narrow than just hockey or his next contract.

“I like to joke around and laugh,” Kassian said. “We say my daughter is not going to be able to pull any fast ones on me because I’ve done everything in the book.”