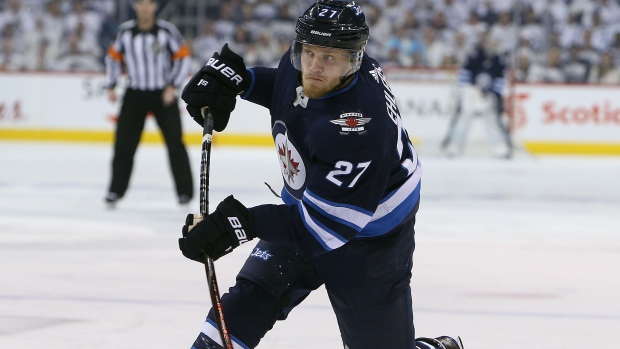 Take a look at the Winnipeg Jets’ depth chart without Patrik Laine and Kyle Connor on the wings.

The first word that may come to mind is “thin” – a term no one would have used to describe the Jets’ firepower over the past two seasons.

It’s not difficult to envision, then, why Nikolaj Ehlers will be a critical piece to the Jets’ upcoming season – no matter how much time (if any) his two higher-profile teammates miss.

Ehlers said he can’t put himself in the shoes of either of his restricted free agent teammates. Ehlers said the seven-year, $42-million extension he signed two years ago came together in all of three days.

“It’s hockey. They're not the only two players without a contract right now,” Ehlers said last week at the NHL Player Media Tour in Chicago. “Would it be better if they were at the first day of camp, if they were in Winnipeg? One hundred per cent. Everyone wants them to be back, but right now we need to focus on what we do have to try to create something off that.”

That’s exactly what Ehlers did this summer back home in Denmark. He focused on himself.

When we think of summer training for hockey players we envision barbells clanging in the gym, uphill sprints and hours of skating on the ice.

Ehlers, 23, did all of that, but he also turned the focus inward. He said he watched every single shift of the 62 games he played with the Jets last year.

“In the summer, what else are you going to do? I play golf, I play tennis, hangout with my family and my friends, but you can’t do that for 24 hours a day,” Ehlers said. “I work out, I practise on the ice, and when I go to bed, I watch one or two games.

“Think about this stuff, wake up, next practice, see how it goes.”

What Ehlers said he found out was the 90 per cent of his mistakes were repetitive.

The mistakes are “a lot of small details” but Ehlers says if he changes them that “wow, this can make a difference.”

He watched so many games that Ehlers was able to quickly rattle off what he was watching.

Ehlers said Jets head coach Paul Maurice had been preaching some of those details to him in the past. It might have taken time to sink in, for Ehlers to see over and over again with his own eyes for it to internalize. He said he is “ready to work” on those things now.

There is no question that last season was a disappointing one for Ehlers.

He missed a quarter of the season with injury. When he was on the ice, Ehlers collected goals at above his career average rate (0.34 per game), but his point production dipped, particularly collecting even-strength assists. He finished with 21 goals and 16 assists for 37 points in 62 games. That’s a 49-point pace over 82 games, well below the 60-point threshold he hit in each of his previous two seasons.

What stung the most, Ehlers admitted, was going through a second straight playoffs without a goal.

Ehlers has a doughnut – zero goals – in 21 career Stanley Cup playoff games with the Jets. Maurice cut his ice time three minutes per game from the regular season in that first-round series with St. Louis.

“I’d be lying if it didn’t touch [a nerve] with me at all,” Ehlers said. “Not scoring in the playoffs sucked. There’s no other word for it. It sucks, but it’s not like I get to the playoffs and I just shut myself down. I work as hard as I can to help this team win every single day.

“I wasn’t happy with my season last year because of injuries. It wasn’t going the way I wanted to, but it is a new season. I’m happy with where I am at right now.”

That’s why Ehlers said he “doesn’t care” about what the expectations are for the Jets this season.

“We have lost some players, but we’ve also got some pretty good players,” Ehlers said. “We have to focus on us as a group. We’ve got to do that as soon as camp starts. I am sure that I know that we have the team that can do some good things. I hope it happens.”