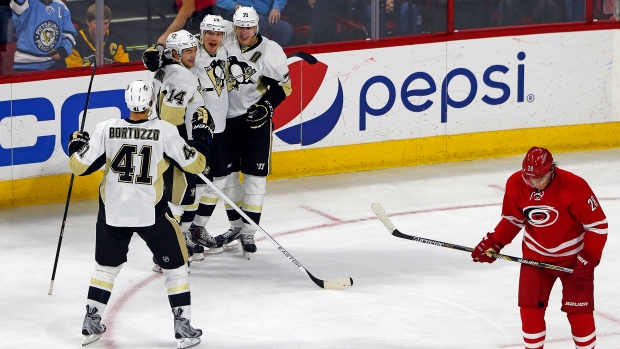 RALEIGH, N.C. - One night after Sidney Crosby said the Carolina Hurricanes outworked his club, the Pittsburgh Penguins captain liked what he saw in the rematch.

Christian Ehrhoff scored his first goal of the season with 4:33 remaining, helping the Penguins to a 3-2 victory over the Hurricanes on Saturday night.

"I thought we executed a little better," Crosby said. "When you can get a fresh start the next day and you know that you're playing the same team, you're pretty motivated, given the way things went the night before. We competed hard."

Things didn't go Pittsburgh's way on Friday during a 4-2 loss to Carolina.

On Saturday, the Penguins (10-3-1) responded quickly to an early Carolina goal and held on to finish November on a high note.

Robert Bortuzzo's first-period goal gave Pittsburgh a lead it didn't relinquish. Thomas Greiss had 32 saves for the Penguins, who are 13-1-1 when leading after two periods.

"Those were key goals in a tight-checking game," Pittsburgh coach Mike Johnston said. "Our battle level was certainly a lot higher than it was (Friday) night."

Ehrhoff followed his backhanded shot and put in a wide-angle forehand on the rebound to make it a two-goal edge in the third.

Justin Faulk put the Hurricanes ahead 1-0 with a power-play goal in the first — just 17 seconds before Chris Kunitz tied it for Pittsburgh — and Elias Lindholm cut Carolina's deficit to 3-2 with 11.7 seconds left in the game.

Pittsburgh (16-5-2) avoided its first losing streak in regulation games this season. Anton Khudobin had 30 saves for the Hurricanes, 1-11-2 when trailing after two periods.

The teams traded early goals in the first period. Faulk struck first, but before that goal was announced, Kunitz tied it.

Evgeni Malkin skated behind the Carolina net and found Kunitz, who one-timed a shot at 3:56 for his first goal since Nov. 4.

Bortuzzo pushed the Penguins ahead 2-1 at 5:32. He skated between two defencemen, who didn't slide toward him. Bortuzzo had a clear path to the net and beat Khudobin for his second of the season.

Both teams started backup goalies in the second half of the home-and-home series. Cam Ward beat Pittsburgh's Marc-Andre Fleury on Friday. Greiss improved to 3-1-1.

"He's played outstanding," Johnston said. "Every game he's been in, he's given us a chance to win."

The Penguins played without centre Marcel Goc and defenceman Kris Letang, both of whom were out with injuries sustained Friday. Andrew Ebbett was called up to take Goc's place in the lineup, and Bortuzzo stepped in for Letang.

NOTES: The Penguins have won four consecutive games at Raleigh, the longest streak against the Hurricanes since the franchise moved from Hartford in 1997. ... Pittsburgh, 9-2-1 on the road, is 13-1-1 when leading after two periods and 4-2 when the opponent scores first. ... Nathan Gerbe played his 100th game with Carolina. ... The Penguins are 3-3-2 in back-to-back games. The Hurricanes fell to 4-7-1, including 1-4-1 in the back half.