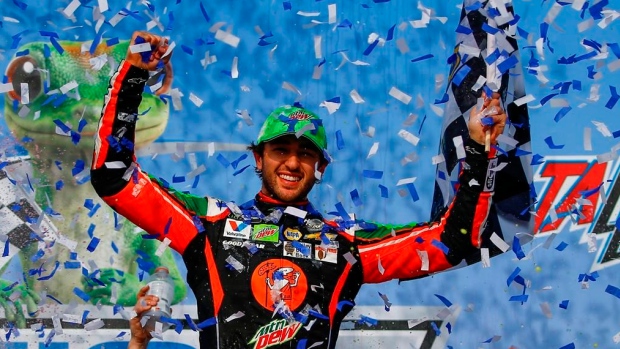 DOVER, Del. — Chase Elliott took a solo run on the track for qualifying and was alone atop the Dover speed chart.

Elliott followed his first win of the season with a pole at Dover International Speedway, topping the speed chart on a blistering day at the track with a record 165.960 mph in NASCAR's first qualifying session since it reverted to single-lap runs.

"Hopefully, we can keep it going in the right direction," Elliott said.

The speeds on the mile-concrete track may be going a dangerous direction for the field in Sunday's Cup race. The new package this season had cars coming to Dover with 750 horsepower and more downforce that led to each car seemingly going faster than the last earlier in the day. Brad Keselowski held the track record of 164.444 mph, and 23 cars topped that speed during Friday's lone practice session.

"If it's a surprise to anybody, it's not a surprise to the race teams," 2014 NASCAR champion Kevin Harvick said. "I would argue that fast is easier this time around than it was last year with a bunch less downforce. It's a lot faster but in my opinion, it's a fair amount easier."

Kyle Busch said there was "no question" the cars had hit dangerous speeds at Dover.

"If you have a problem here with the speeds we are carrying into the corner, it is going to hurt," he said. "The faster you go, the harder you are going to hit the wall. The IndyCar guys were flying around here, and they don't come here anymore, because it was too fast, too dangerous for them. Eventually, there comes a point where it becomes too fast for a stock car, too."

Elliott claimed the official mark in single-lap qualifying. NASCAR for more than five years has used a group qualifying format but it was abandoned this week and it was back to single-car laps to set the field.

NASCAR was adamant it was trying to keep qualifying entertaining for fans because single-car runs are tedious, but teams continued to find loopholes that made the format a farce. Most drivers waited until the very last moment to pull off pit lane for their qualifying run; and all 12 drivers in the final round at California in March missed the cutoff point to even register a lap.

Elimination-style rounds were also cut. NASCAR said the single-car qualifying format will be in effect for the rest of the season, though group qualifying will remain in place at road courses.

"Qualifying, in my opinion, has been too much of a topic of conversation," Harvick said. "The way that qualifying is now across all three series is going to be good to take away the conversation. We don't need to be talking about qualifying, especially on a week like this especially after you had Chase Elliott win a race. Here we are, talking about qualifying instead of celebrating our most popular driver's most recent win."

The 23-year-old Elliott became the youngest pole winner at Dover. Elliott got his first win of the season, first for Chevrolet and first for Hendrick Motorsports. Elliott, from nearby Georgia and the son of Hall of Famer Bill Elliott, felt the rousing approval from fans. Elliott stopped by the Pool Room in Dawsonville, Georgia, a local watering hole in his hometown that sounds a siren across town to signal every victory by their favourite son. Elliott said the win meant more because his mother and grandmother cheered him on at Talladega.

"They're hard enough to win much less when you have important people there in your lives," Elliott said.