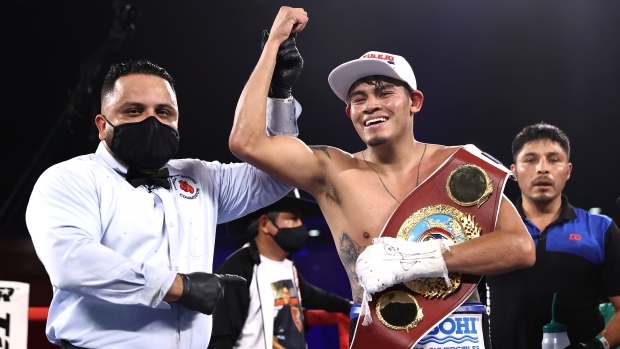 Emanuel Navarrete defended his WBO featherweight title and super middleweight Edgar Berlanga was forced to work past the opening round for the first time in his 17-fight pro career to earn a win on a thrilling night of Top Rank boxing.

Navarrete earned a 12th round TKO victory over Christopher Diaz to retain his belt, as he came on late in the fight looking for the stoppage.

Diaz reached his feet following a knockdown in the final round, but his corner stopped the fight with seconds remaining on the clock, bringing the title fight to an end.

This was Navarrete’s first title defence as he improves to 33-1, with 28 KOs and one no contest overall.

In the co-main event, all eyes were on Berlanga and his impressive streak of 16 straight first-round knockouts to start his professional career.

His opponent Demond Nicholson was able to escape the first round, but didn’t pose much of a threat as Berlanga earned a one-sided unanimous decision victory to improve his record to 17-0.

Berlanga added four knockdowns to his ledger, including a final one with seconds remaining as he almost earned the finish at the Silver Spurs Arena event.