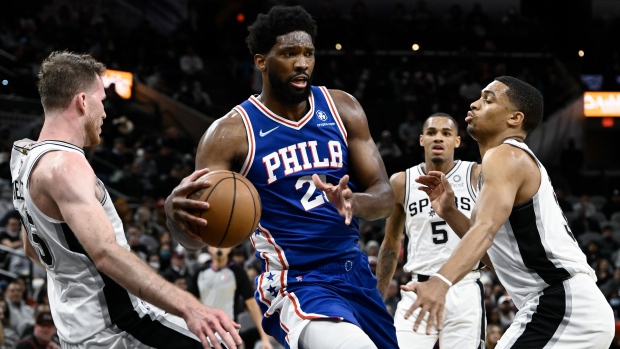 SAN ANTONIO (AP) — Joel Embiid had 38 points and 12 rebounds and the Philadelphia 76ers held off a late rally to beat the San Antonio Spurs 115-109 on Sunday night.

Tobias Harris added 18 points and 11 rebounds and Furkan Korkmaz had 17 points for Philadelphia. The 76ers have won seven straight over the Spurs.

Jakob Poeltl had 25 points and 10 rebounds and Dejounte Murray added 19 points and 12 assists for San Antonio.

After trailing by as many as 15 points in the fourth quarter, the Spurs closed to 111-109 on Murray’s steal and breakaway layup with 33.2 seconds remaining as part of an 8-4 run. Embiid would seal the victory with a pair of free throws with 14.9 seconds left.

Coming off a 40-point performance Friday in a one-point loss against the Los Angeles Clippers, Embiid shot 16 for 32 from the field in 32 minutes.

Philadelphia won its fourth in six games despite missing some key players.

In addition to continuing to be without All-Star forward Ben Simmons, the 76ers had four players out with injuries including Seth Curry and Danny Green.

The Spurs rallied, closing the game shooting 48% from the field but were only 10 for 30 on 3-pointers.

76ers: Embiid had 31 points in Philadelphia’s 119-100 victory over San Antonio on Jan. 8. … Curry missed his second straight game with a sore left ankle. … Green has sat out six consecutive games with a right hip injury. … Matisse Thybulle has missed five straight since suffering a sprained right shoulder. … Shake Milton did not play due to a bruised back. …The 76ers are 17-9 on the road.

Spurs: San Antonio assistants Becky Hammon, Mitch Johnson and Darius Songaila remain out in the league’s health and safety protocols. … Poeltl collected his 16th double-double, surpassing last season’s total of 15. … The Spurs recalled F Zach Collins from his G League assignment, but he remains out while reconditioning after last playing in an NBA game on Aug. 15, 2020. Collins’ last played against Memphis while with Portland before exiting seven minutes into his start due to left ankle inflammation. Collins had surgery Dec. 30, 2020, to repair a stress fracture in his left foot and needed a second surgery June 29, 2021, after refracturing the foot. … Murray had 48 points, 24 assists and 22 rebounds in his previous two games, earning triple-doubles in both. The Spurs at 9-14 at home.

Spurs: At Houston on Tuesday.