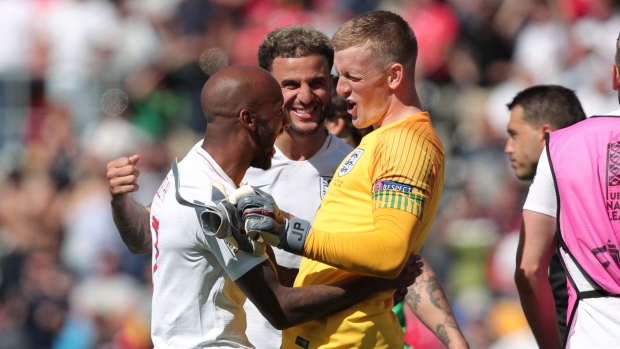 GUIMARAES, Portugal — Goalkeeper Jordan Pickford scored a penalty kick and then saved one to give England a 6-5 victory over Switzerland in a sudden death penalty shootout Sunday to claim the consolation prize of third place in UEFA's inaugural Nations League competition.

With the game still goalless after extra time, Pickford dived to his right to save a penalty by Swiss substitute Josip Drmic. That came after Jordan had surprised some fans by stepping up to smash in the penalty which made it 5-4 to England.

England won its first ever World Cup penalty shootout last year — with Pickford again making the key save — to advance to the quarterfinals after beating Colombia. England exited the World Cup on penalties in 1990, 1998 and 2006.

This shootout took place in a lower-stakes environment with England and Portugal meeting after failing to reach the final, which featured Portugal and the Netherlands later Sunday.

England's defensive blunders helped to give the Netherlands a 3-1 win in Thursday's semifinal, while Switzerland lost by the same margin after a hat trick by Cristiano Ronaldo for Portugal.

A largely lacklustre encounter in the northern Portuguese city of Guimaraes, played at the end of a long European football season, produced no goals during regular time, though England looked the most likely to score and hit the Swiss woodwork four times.

Harry Kane returned as captain and hit the bar with a chip after just two minutes and several promising chances fell to Raheem Sterling, who hit the bar from a free kick with three minutes of extra time remaining.

Substitute Callum Wilson looked to have broken the deadlock when he netted six minutes from the end, but the referee ruled after a video replay that he had fouled a defender.

England coach Gareth Southgate made seven changes from the starting lineup that faced the Dutch.

England, which reached the semifinals of the World Cup last year, missed its chance to lift an international trophy for the first time since the 1966 World Cup. It is now readying for Euro 2020, with Wembley Stadium in London hosting the final.