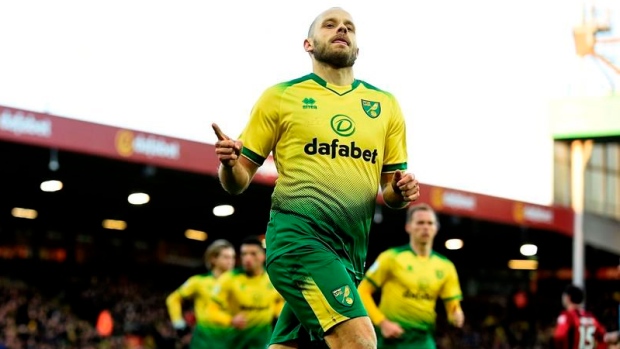 NORWICH, England — Norwich held on for a 1-0 win over fellow strugglers Bournemouth on Saturday in a game which saw the Premier League's first pitchside VAR review.

Both teams finished the match with 10 players.

Referee Paul Tierney, who had already sent off Bournemouth's Steve Cook for a clear red in the first half, decided to consult his monitor in the second before upgrading Ben Godfrey's yellow card to a red.

Cook's dismissal came when he handled Ondrej Duda's goalbound shot after Teemu Pukki had been denied by Aaron Ramsdale. Pukki fired his side into the lead from the subsequent penalty to put Norwich in a good position to secure its first home win since September.

In the second half, Godfrey was dismissed after review for an ill-judged tackle on Callum Wilson.

Norwich went into the match eight points adrift of safety at the foot of the table, but closed the gap to six and is three points behind 19th-place Bournemouth.

Norwich manager Daniel Farke said both red cards were correct decisions. On whether Tierney's use of the monitor was an improvement on the previous situation, the Canaries boss said: “We have this experience in Germany, and it depends if the decision in the end is right or wrong.”