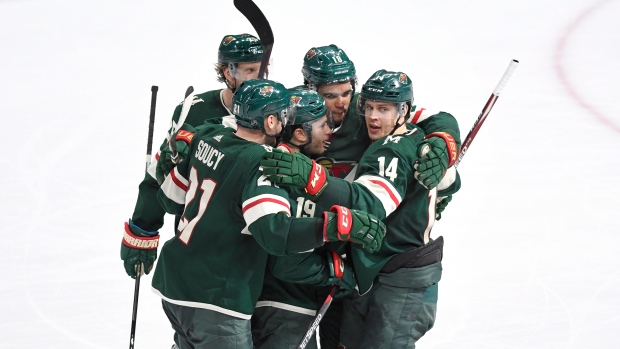 ST. PAUL, Minn. — Eric Staal was a gametime decision for the Minnesota Wild, two days after he was injured while colliding with a linesman.

Staal made it through the morning workout without any issues and Minnesota was happy to have its top-line centre back in the lineup against the Edmonton Oilers.

After Edmonton rallied from a two-goal deficit in the third period to tie it, Staal scored the go-ahead goal with 4:47 remaining and Luke Kunin added another tally as Minnesota recovered to beat the Oilers 6-5 on Thursday night.

“He’s been a big-time player his whole life, so these are things that I expect,” Wild coach Bruce Boudreau said.

Ryan Donato scored for the third straight game and Jordan Greenway, Jason Zucker and Marcus Foligno added goals for the Wild, who have points in 13 of their past 14 games. Rookie goaltender Kaapo Kahkonen stayed unbeaten in four career games with 28 saves for Minnesota.

“First real bit of adversity that’s hit us,” Oilers coach Dave Tippett said. “Talked to our leadership group in there to make sure we stay together. This is the first real test for them, so it’ll be interesting to see them making sure we keep that room together in there, and we’ll see how our leadership does.”

Edmonton rallied in the third when Haas and McDavid scored 2:06 apart to make it 4-all.

Staal and Kunin answered with their quick pair 1:08 apart.

Staal was hurt Tuesday night when he knocked into linesman David Brisebois.

“I had a few of those before and it just kind of shoots down your limbs a little bit and your arm, and it’s kind of a scary feeling,” Staal said. “Didn’t really subside a lot till a lot later than it had in the past. But we took the right steps and I was fine to go today.”

Minnesota was 6-11-1 and near the bottom of the Western Conference on Nov. 12. But the Wild have rallied despite being without goaltender Devan Dubnyk and with captain Mikko Koivu missing his third straight game with a lower-body injury.

The Wild started the day with 20 points since Nov. 14, tied for the most in the NHL during that span.

“I just think, I don’t know what it is right now, but we feel it,” Kunin said. “We don’t get too high, too low. We know we can win these kind of games. There’s no panic there on the bench. That’s a big positive when you see that out of your group.”

Much of the success for the Wild has come on home ice (8-1-3 record) and they got a fortunate bounce to tie the game midway through the first period after Klefbom opened the scoring.

Smith couldn’t grab a point shot from Minnesota defenceman Carson Soucy and the puck bounced off the goaltender's glove, caromed against Greenway’s back and into the net. Zucker scored his 12th goal of the season on a breakaway to give the Wild the lead heading into the first intermission.

“There was some breakdowns in our zone that, as a goalie you want to cover those mistakes up and make some saves,” Smith said. “If the last two games you let in six as a group, you’re not going to fair to well.”

Draisaitl tied it two minutes into the second period with a power-play goal. Minnesota responded with Foligno scoring less than two minutes later and Donato scoring his sixth of the season.

NOTES: Dubynk missed his 12th straight game as his wife deals with a serious medical condition. ... Edmonton was 1 of 2 on the power play and started the game leading the league at 31.6% with the man advantage. It was the Oilers' fifth straight game with a power-play goal. ... The Wild have allowed a power-play goal in 12 of the past 13 games. ... Smith is 6-14-2 lifetime against Minnesota. ... The Wild are 8-0-3 in their last 11 home games. It’s the second-longest home point streak in team history.