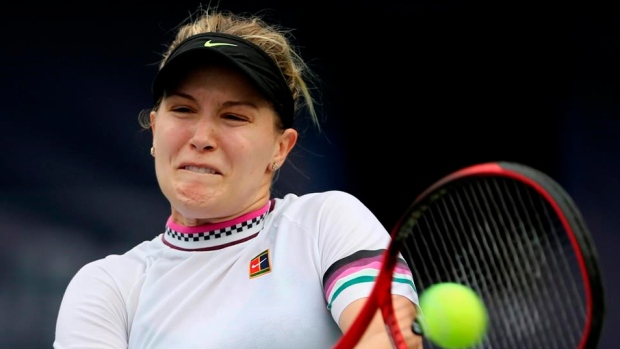 PRAGUE, Czech Republic — Eugenie Bouchard's run at the Prague Open has come to an end.

Bouchard gave Elise Mertens a tough time in a quarterfinal match Friday, but in the end the No. 3 seed from Belgium defeated the wild-card from Westmount, Que., 6-4, 1-6, 6-4.

Mertens won her previous two meetings with Bouchard without dropping a set.

Bouchard was playing in an official tournament for the first time since January when she suffered a wrist injury. Just over a month later, the WTA Tour suspended play because of COVID-19.

This is the second week of play in the WTA Tour's restart. No fans are at the facility.

Bouchard is projected to rise 58 spots to No. 272 in the WTA rankings following her run to the quarterfinals.

In other quarterfinal results, top seed Simona Halep defeated Magdalena Frech 6-2, 6-0 and Ana Bogdan advanced past Kristyna Pliskova after Pliskova retired down 5-2 in the first set.

Jil Teichmann faced Catherine Bellis in the other quarterfinal.

This report by The Canadian Press was first published on August 14, 2020.