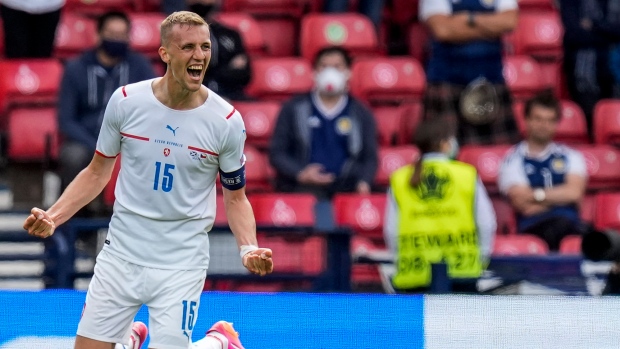 Flying high after a big win over Scotland, Patrik Schick and the Czech Republic can book their place in the knockout round by defeating a Croatia side that knows it has more to give than what it showed in their Euro 2020 opening 1-0 loss to England.

The 2018 World Cup runners-up must find another gear to ensure that their Euro campaign isn’t a short one.

Croatia assistant coach, and member of the 2018 World Cup team, Vedran Corluka, says it’s no secret that his squad is having trouble scoring goals.

"Recently, we've had a problem in the attacking phase,” the former Manchester City and Tottenham Hotspur defender said. “We easily get into the opponent's third, but we don't have enough players in that final phase. And that problem has been around for some time. We are working on it, to fix that for the next match, and I am sure we will look much more dangerous on Friday."

One such adjustment Croatia might make is the addition of Nikola Vlasic to the starting XI. The CSKA Moscow attacking midfielder came on as a substitute in the 70th against England, but says he’s ready for a bigger role against the Czechs.

"I am ready, I feel physically good, as does the whole team,” Vlasic said. “The Czech Republic and Scotland are both good teams, and in their match Scotland also had their chances. It was a good match. But our goal is to prepare well and to win our last two matches."

There will also be questions for Zlatko Dalic about who will make up his backline. Zenit Saint Petersburg defender Dejan Lovren has declared himself fit after missing out on the England match due to injury, but Rangers left-back Borna Barisic is once again unavailable with a lingering back injury.

As for the Czech Republic, manager Jaroslav Silhavy knows that his team’s fate is in their own hands.

"Our desire is clear – we want to qualify from the group,” Silhavy said. “A point out of two games might be enough, but we do not want to play for a draw. Croatia were runners-up in the World Cup with top-quality individuals from big clubs. If we want to succeed, we need another excellent team performance with some extra bits. This is the only way to win."

Defender Vladimir Coufal believes that the Czech Republic are going to have to deal with a Croatia side that will be looking to impose their will on the match in order to get their Euro back on track.

"What do I expect? I expect that Croatia is going to want to win, they will play a strong game with the ball,” the West Ham man said. “They will play with a lot of possession. They will want to keep the ball in order to deprive us of our physical strength. We have had some video footage, a tactical plan and we will see how we are going to fight with it."

Friday’s match will mark the second straight Euro in which these two teams have met. In 2016, Croatia and the Czech Republic were drawn into Group D with the Czechs the only team in the group that Croatia didn’t defeat. On a June afternoon in Saint-Etienne, the two teams played to a 2-2 draw with the Czechs fighting back from a 2-0 deficit.