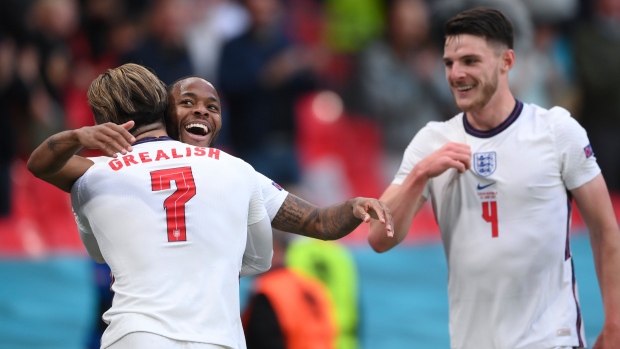 Raheem Sterling's second goal of Euro 2020 gave England a 1-0 win over the Czech Republic at Wembley Stadium on Tuesday.

With the win, the Three Lions finish atop Group E, while the Czechs also move on despite the loss, finishing third in the group.

The only goal of the match came in the 12th minute following a spell of attack from England. Jack Grealish beat his defender and chipped a cross to the back post. Bukayo Saka, who didn't look out of place in his first action of the tournament, couldn't reach it, but Sterling could and headed home to make it 1-0.

The Czech Republic's best chance to tie it came only minutes later, but Jordan Pickford was up to the challenge. In the 28th, Tomas Soles let fly from just outside the area and his hard drive was earmarked for the top corner of the England net, but the Everton 'keeper dove headlong to parry it away for a fine save.

Going into the half with a 1-0 edge, it was England's 31st match at Wembley in which they had led at the half. They were 30-0 prior to Tuesday and made it 31-0 by holding out in the second half.

With the win, England gets to stay in London, seeing action next on Tuesday. England finishes their group stage without conceding a goal.

Ivan Perisic's late goal in Croatia's 3-1 win over Scotland, meant that the Czech Republic falls to third in the group.