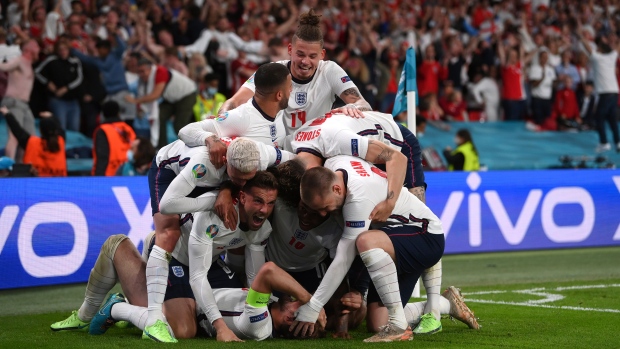 Harry Kane's 104th-minute goal sent Wembley into a frenzy as England beat Denmark 2-1 in extra time to reach the final of Euro 2020 and set up a date with Italy in London on Sunday.

England will play in its first ever Euro final and first final of a major tournament since winning the 1966 World Cup. Denmark, the Cinderella of this year's tournament, will head home.

The Danes got on the board first with one of the prettiest goals of the tournament.

In the 28th, Denmark was awarded a free kick when Luke Shaw was adjudged to have taken down Andreas Christensen.

From about 25 yards out, Mikkel Damsgaard curled a beautiful effort over the England wall and past an outstretched Jordan Pickford, who got a fingertip on the shot, but not enough to stop Denmark from going up 1-0.

It was the first goal of Euro 2020 scored on a direct free kick and the first conceded by England, ending a 691-minute clean-sheet streak.

England looked for an equalizer shortly thereafter, but Kasper Schmeichel, who was brilliant went called upon, had other ideas. In the 38th, Harry Kane played in Raheem Sterling alone, but his hard strike was brilliantly stopped by the Leicester City goalkeeper.

A minute later, though, he wouldn't be so lucky. Kane found Bukayo Saka streaking down the right side. Spotting Sterling making a run, Saka's low cross was turned into his own net by Denmark captain Simon Kjær before Sterling could tap in and England were level at 1-1. It was the 11th own goal of Euro 2020.

After the restart, both teams traded chances. In the 51st, Damsgaard tried for a second, but was denied by a fine Pickford save even if the play appeared to be offside.

Schmeichel was at his best again in the 55th. Off of a free kick, a Harry Maguire header seemed destined for goal, but it was parried away by his former club teammate Schmeichel with a diving save.

There were cries for an England penalty in the 74th. Kane appeared to be taken down in the area by Christian Norgaard, but the referee gave the foul the other way and his decision was confirmed by VAR.

England controlled the tempo late and enjoyed a majority of possession, but couldn't trouble Schmeichel or find a winner in regular time.

Extra time began much of the same way that the match ended with one-way traffic towards the Denmark goal.

Finally in the 103rd, England was able to do something with all of its possession. As Sterling made a run into the area, he was adjudged to have been clipped by Joakim Mæhle. The referee pointed to the spot and VAR confirmed the decision.

Kane stepped up to take the penalty and his low drive was stopped by a diving Schmeichel, but Kane was the first to pounce on the rebound and beat the Danish goalkeeper for the goal that put England in the Euro 2020 final.