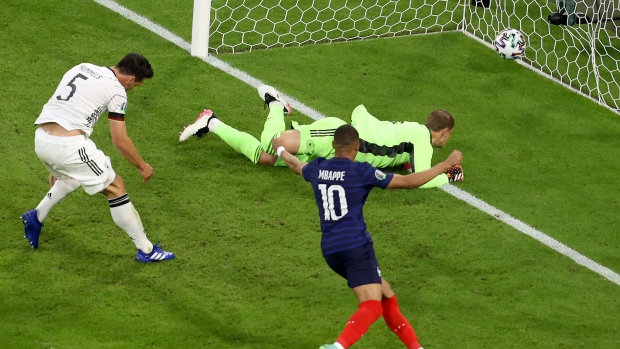 In a battle between the last two World Cup winners, France pulled out a 1-0 victory over Germany in Munich in what was a lively Group F encounter.

The match's only goal and the difference between the two sides was Mats Hummels' 20th-minute own goal. It was the first ever own goal conceded by Germany at a Euro.

Manchester United midfielder Paul Pogba was the architect of the goal. Using the outside of his boot, Pogba spun a beautiful ball out wide to Lucas Hernandez. The Bayern Munich defender sent a cross across the face of goal for a trailing Kylian Mbappe, but before it could reach the Paris Saint-Germain man, Hummels' attempted intervention directed the ball into the top of the goal and past Manuel Neuer.

On two different occasions, France thought they had a second.

In the 66th, Mbappe collected a ball from Pogba into the area. Biding his time, he evaded Joshua Kimmich before beating Neuer with a low drive off of the post. But as soon as the goal was scored, the flag went up for offside.

Then in the 84th, Pogba found Mbappe again, who slid the ball across the face of goal for Karim Benzema to hammer home in what would have been his first France goal in six years and first in a major tournament since World Cup 2014.

In a bizarre moment in the closing seconds of the first half, Chelsea defender Antonio Rudiger appeared to bite Pogba on the back of his shoulder. There was no booking for the incident that was missed by the referee.