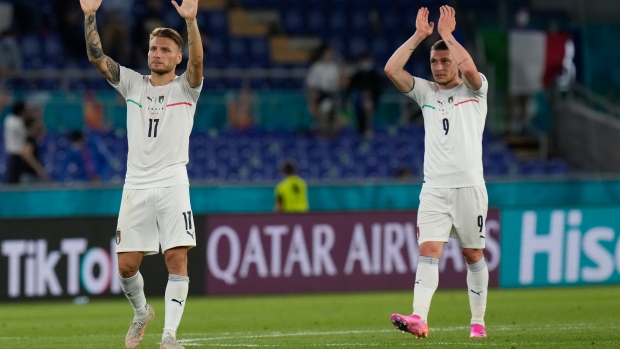 Switzerland winger Xherdan Shaqiri spent 15 games at Inter in 2015 and enjoyed his time there, but says he wants to spoil former manager Roberto Mancini’s Wednesday evening.

"I want to give Mancini a disappointment,” the Liverpool player said ahead of Switzerland’s Group A match against Italy in Rome. “We must break their defence in order to score, and also be careful all round against such a great side. We have good chances to progress."

In their opening match on Friday against Turkey, the Azzurri had their way with the game for 90 minutes with a classy display across the board. Domenico Berardi led a stylish midfield and veterans Giorgio Chiellini and Leonardo Bonucci directed traffic in central defence before Lorenzo Insigne and Ciro Immobile wrapped up their 3-0 win with goals.

Mancini hopes for a repeat performance on Wednesday, but knows that Switzerland has a reputation for stifling their opposition.

"Switzerland have traditionally caused Italy trouble," Mancini said. "They have been in the top 10 in the FIFA rankings for years, they have great players and a very experienced coach [Vladimir Petkovic]. We will have to respect them a lot."

A nine-time Serie A winner, Bonucci says it’s important that the Azzurri don’t get carried away with their opening victory and stick to the task at hand.

"We have said many times that remaining humble and keeping our feet on the ground is the secret to having a great tournament and I'm sure this group will have this approach until the end,” the 34-year-old Juventus defender said. “This will certainly help us to play every game with the right level of focus and tension."

Mancini also addressed the status of Marco Verratti ahead of the Switzerland match. The Paris Saint-Germain midfielder was included on the Azzurri’s roster despite having been injured last month towards the end of the Ligue 1 season. The former Manchester City manager says that he’s hopeful Verratti will be available against the Swiss.

"He is improving day by day,” Mancini said. “We will see tomorrow if he will be able to be on the bench against Switzerland, but we are very optimistic about his condition."

As for Switzerland, Petkovic’s team heads into Wednesday feeling a little unlucky not to have taken the full three points from the weekend’s 1-1 draw with Wales and faces a tougher task in the Azzurri.

The 57-year-old former Lazio manager, back at the Stadio Olimpico for the match, says there’s no magic bullet when it comes to taking on the Azzurri.

"There are no secrets [in beating Italy],” Petkovic said. “We have to be brave and be in the game for the full 90 minutes."

Historically, Italy has dominated the all-time series against Switzerland, going 28-22-7, but the two teams have not met since 2010. The last time the Azzurri took on Switzerland, the two sides played to a 1-1 stalemate in a friendly in Geneva with Gokhan Inler and Fabio Quagliarella trading goals in the game’s first 14 minutes.