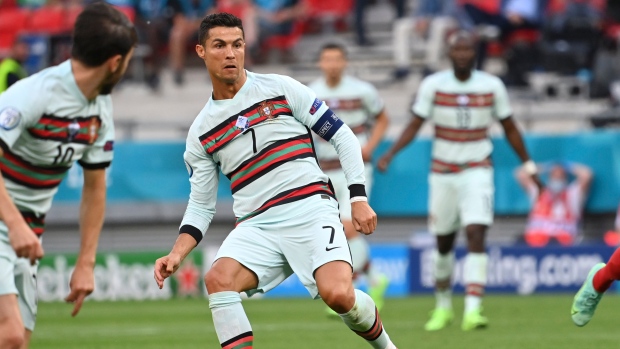 It’s arguably the most anticipated group-stage match and it just so happens to be the final group-stage match of Euro 2020 – in a rematch of the Euro 2016 final, Portugal takes on France in Group F action. And while the stakes might not be as high as they were five years ago in Paris, there is still very much to play for both of these sides.

Coverage of Portugal vs. France begins at 2pm et/11am pt on the TSN Network and streaming on TSN.ca, the TSN App and TSN Direct.

Les Bleus enter the contest in better shape than their counterparts. The results of Monday’s matches meant that France’s qualification for the Round of 16 was secured before they even take the pitch against the defending Euro champions, but where they go next is undetermined and France controls its own fate.

Didier Deschamps’ team earns top spot with a victory against Portugal. And, right now, that seems to be the only potential they’re focused on.

"The objective is to win the match to carry on our good run and build our confidence before the new competition that will start in the Round of 16,” France captain and Tottenham Hotspur goalkeeper Hugo Lloris said. “Playing Portugal is a big challenge for us. They are still playing for their qualification. We are looking to finish as high as we can in the group."

A victory for France could greatly diminish and even doom Portugal’s chances of reaching the knockout stage, but Deschamps says that avenging their 1-0 extra-time loss in the 2016 final isn’t on anybody’s mind right now.

"There's no extra motivation with the possibility of knocking out Portugal,” Deschamps insisted. “Our ambition is to get the best result possible that will have an impact on the standings and, incidentally, on our opponents."

Portugal is looking to bounce back from a disastrous 4-2 loss to Germany on Matchday 2 when Portugal was second best for virtually all of the 90 minutes and spent huge swaths of the match hemmed into their own end.

"We've analyzed the Germany game and come to the conclusion we weren't playing the Portuguese brand of football,” manager Fernando Sousa said. “Something is wrong if a team that has conceded three goals in game only once in 58 games [and then] concedes four for the first time. You need to both attack and defend well."

Veteran defender Pepe concedes that the performance against Germany was demoralizing.

"The team were very sad,” the 38-year-old Porto man said. “We did our individual analysis, and then with the coach. We have a big desire to demonstrate our character. The team are well-prepared and ready to prove ourselves in tomorrow's game."

Pepe says a win against France would make up for any stumbles his team has gone through during the group stage.

"We can take six points from a possible nine in a difficult group,” he said. “We might not look our best, but we are not that bad. Indeed, we had a bad game [against Germany] and now we have the opportunity to correct it by doing what we know we can do and achieving the victory."

A win against France coupled with Germany’s failure to win would give Portugal top spot in the group. A draw with France would be enough for passage into the knockout round, but a loss paired with a Hungary victory would leave Portugal dead last in Group F.

These two teams have seen each other since the 2016 Euro final. France and Portugal played in the same UEFA Nations League group last year, meeting twice in 2020. The teams played to a 0-0 draw in Paris in October, before France pulled out a 1-0 victory the next month in the return fixture in Lisbon with N’Golo Kante scoring the game’s only goal.