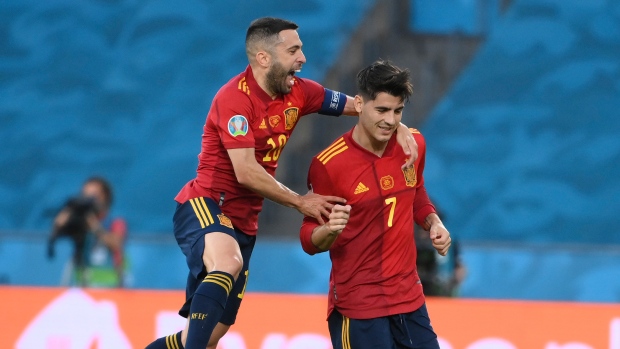 Heading into the final match of the group stage that will determine whether or not Spain lives to fight on for a third Euro title in four tournaments or crashes out spectacularly, manager Luis Enrique is brimming with confidence…sort of.

Coverage of Slovakia vs. Spain begins at 11am et/8am pt on the TSN Network and streaming on TSN.ca, the TSN App and TSN Direct.

“Convincing” is not an adjective you would use to describe Spain through two matches of Euro 2020. “Tentative,” “misfiring” and “wasteful” would be more apt descriptors for a team facing a potential embarrassing elimination in front of home fans in Sevilla on Wednesday. But Spain’s fate remains in its own hands.

Should Spain do as Enrique predicts and beats Slovakia, then passage into the knockouts is confirmed. A third draw in three games could also potentially be enough if Sweden were to beat Poland in Group E’s other matchup. But a draw wouldn’t be enough should Poland emerge as victors against group-leading Sweden, who have already qualified for the knockouts. A loss, of course, means doom.

One potential change that could spur Spain on is the return of Sergio Busquets. The Barcelona midfielder missed Spain’s first two contests after a positive COVID-19 test, but is now available for selection in this do-or-die fixture.

"We have a winning mentality,” Spain’s captain said. “We need to regain the ball quicker and higher up the pitch, to show deep intensity. The squad is optimistic but if we can produce more of these things and get just a touch of luck then our confidence will soar."

The biggest adjustment that La Roja needs to make is doing more with the amount of possession it has and the goal-scoring opportunities that have been spurned with Atletico striker Alvaro Morata, currently on loan at Juventus, guilty of a number of bad misses.

“One of the things we have discussed is the players being a little more daring creatively,” Enrique said. “The players want – and will try to – take risks. When you get to the final phase inside the box, you have to create chances. We tend to create more than our opponents.”

For Slovakia, the job is a simpler one. Get one point from the match and you’re on to the Round of 16 for a second consecutive Euro. A win, coupled with Sweden’s failure to win, would give Slovakia top spot in the group. But a loss against Spain could very likely spell the end of the Slovaks’ tournament.

Midfielder Juraj Kucka says that Slovakia is prepared for a difficult afternoon against the 2008 and 2012 European champions.

"It's always the case that running without the ball is not pleasant at all,” the veteran Parma man said. “We know what we're up against. We're definitely going to discuss this when we prepare with the coach, with video analysis. We are going to prepare well and of course it's not going to be easy at all."

Buoying Slovakian hopes will be the memory of a famous victory over Spain in Euro 2016 qualifying. At Zilina’s Pod Dubnom in 2014, Slovakia was a 2-1 winner over the then-defending Euro champions. It was Kucka who scored the opening goal of the match.

"I have lovely memories of that day,” Kucka said. “I remember they'd been on a long run without losing a match and we were the ones who broke that streak after such a long time. It was nice. We'll see, maybe we'll manage to do something similar here."