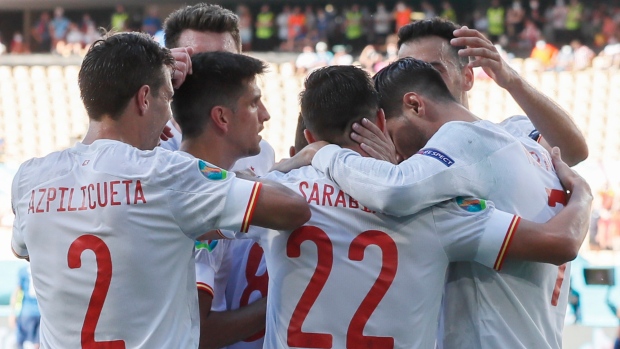 In one of the most memorable games of Euro 2020, Spain recovered from blowing a late two-goal lead that forced extra time to beat a scrappy Croatia side, 5-3, in Copenhagen to advance to the Euro 2020 quarterfinals and a date with either France or Switzerland in St. Petersburg on Friday.

Pablo Sarabia, Cesar Azpilicueta, Ferran Torres, Alvaro Morata and Mikel Oyarzabal had the goals for La Roja, who advance to their first final eight of a major international tournament since 2012.

The way the match began, though, you could forgive Spain for feeling elimination was on the horizon.

After spurning a couple of early chances, a horror show took over for Spain in the 20th. Pedri played what appeared to be a simple back pass to 'keeper Unai Simon, but appearances can be deceiving. The ball eluded the Athletic Bilbao No. 1 and ended up in the back of the Spain net to give a Croatia team, without star midfielder Ivan Perisic after a positive COVID test, a 1-0 lead. It was the ninth own goal of Euro 2020.

But La Roja would bounce back from shocking disappointment. In the 38th, Spain evened matters. As a strong Spanish move played out in the Croatia box and cries for handball against Luka Modric rang out, Paris Saint-Germain man Sarabia hammered home a low strike past Dominik Livakovic for his second goal of the tournament to make it 1-1.

As the second half opened, Spain got out on the front foot and were rewarded for it in the 58th with an all-Premier League goal. Manchester City's Ferran Torres whipped a cross into the area and Chelsea captain Azpilicueta snuck behind his marker, Josko Gvardiol, to head home and take Spain's first lead of the match at 2-1. The goal made Azpilicueta, still only 31, Spain's oldest ever goal scorer at a Euro.

Spain would catch Croatia napping in the 78th to extend their lead.

With a free kick in their own side of midfield, Spain substitute Pau Torres launched the ball across the field to Ferran Torres, who managed to stay onside. Cutting diagonally into the area, Torres slotted home past Livakovic to make it 3-1.

Croatia got some late hope through Mislav Orsic. In the 85th, Luka Modric squared up a cross in the Spanish goalmouth and it pinged around in a wild scramble. Referee Cuneyt Cakir's watch vibrated, alerting him to the fact that Orsic's effort crossed the goal line before being repelled to make it 3-2.

And it was Orsic who would play hero again in stoppage to send the match into extra time. As an increasingly desperate Croatia pushed forward, Orsic sent a picture-perfect cross to the middle of the area where it was met by Mario Palasic to beat Simon and improbably tie the match in the 92nd.

In extra time, it was Croatia that had the better of the chances early on. Orsic, who was seemingly everywhere for Croatia, nearly had his second goal of the match when his well-struck effort skimmed over the bar in the 92nd.

Minutes later, Simon made up for his earlier gaffe with one of the saves of the tournament, robbing Andrej Kramaric from close range in the 95th.

Another much maligned figure for Spain would help La Roja retake the lead in the 99th. Collecting a cross from Dani Olmo with a beautiful first touch, Morata rifled home a stunner from a tight angle to once again put Spain back on top at 4-3.

Then in the 103rd minute, Spain would finally put it to bed. Taking a cross, again from Olmo, in the middle of the Croatian area, Oyarzabal deftly steered home past Livakovic to make it 5-3 and out of reach for the 2018 World Cup semifinalists.

With that fifth goal, Spain became the first team in the history of the Euro to post back-to-back games of five goals scored.