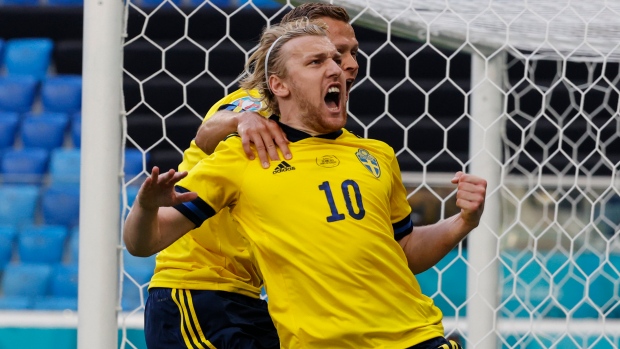 Another 0-0 draw wasn't in the cards for Sweden.

An Emil Forsberg penalty in the 77th minute gave the Blagult a 1-0 win over Slovakia to put them on the precipice of the knockout round of Euro 2020. Should the Swedes advance, it would be the first time the team will have reached the Round of 16 at the Euro since 2004.

It was a smart play by Alexander Isak that led to the penalty call. The 21-year-old Real Sociedad striker sent a deft through ball in for Robin Quaison to get behind the Slovakia backline. Quaison couldn't beat Martin Dubravka, but the Newcastle goalkeeper caught Quaison coming off his line and referee Daniel Siebert immediately pointed to the spot with little protest from a Dubravka, who knew he was guilty of committing the foul.

Forsberg was a bit of a surprise penalty taker for Sweden. Veteran Sebastian Larsson is normally the go-to option for the Blagult, but he missed his last penalty in a friendly against Armenia and Forsberg stepped up for Janne Andersson's team.

In a tournament where scoring from the spot has hardly been a certainty, Forsberg made no mistake with his effort, hammering home and giving Dubravka no chance of making a save.

With the win, Sweden heads to the top of Group E on four points, having played to a scoreless draw with Spain in their opener. In recent history, four points has been enough to advance to the knockout round, but much is still to play for in the group. They finish their group stage on Wednesday in St. Petersburg against Poland.

Having won their opening match against Poland, Slovakia remains very much alive on three points. But a difficult fixture with Spain is Slovakia's final group-stage match, also on Wednesday in Sevilla, with at least a point necessary to advance out of the group.

Poland takes on Spain in Group E's other Matchday 2 contest on Saturday in Sevilla.