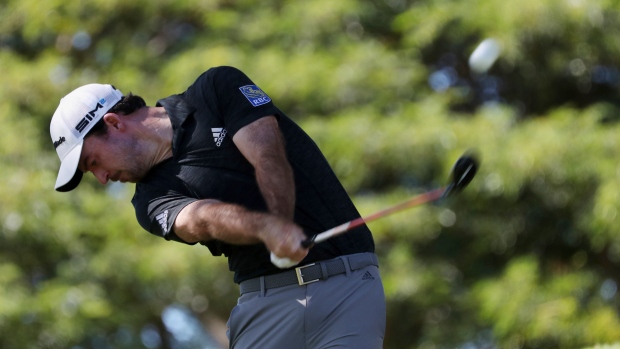 Nick Taylor continued his fine play on Friday, posting a bogey-free round of 66 at The American Express championship to sit in a tie for second place, one shot off the lead.

"I drove it really nice the last two days," said Taylor. "I hit my irons really well today. I had quite a few chances, especially on the front nine."

He made three birdies on the front nine and then ran off a string of pars on the back before dropping three in a row from 15 to 17. On the 15th, he drained a 23-foot putt and added an 18-footer on the 17th.

"I made a couple nice putts coming in on 15 and 17," said Taylor, "which really made the round great and so that was nice."

Taylor has been playing impressive golf since the start of the year. He fired a first-round 67 at the Sentry Tournament of Champions and held a two-shot lead after 36-holes last week in Hawaii at the Sony Open before ending up tied for 11th, his best finish in 16 starts.

The run of good play comes as somewhat of a surprise after Taylor played some mediocre golf late in the season. As well, he spent some of the holiday season back home in the chilly temps of Abbotsford, B.C., and didn’t swing a club.

"I was back in Canada, not a whole lot to do. I think rest was nice," he admitted. "I felt like leaving in the fall I kind of found something at Augusta. I didn't play -- I missed the cut at RSM, but felt like we were working on the right track, so I feel like what I'm working on with my coach, everything is coming together."

In three weeks, he’ll defend his title at the AT&T Pebble Beach, where a year ago, he held off Phil Mickelson to capture his second PGA Tour title. This year will be different with no fans, no amateur partners and only two courses in use.

"It's going to be a little different obviously with no ams and only Spyglass and Pebble," said Taylor, "but I'm looking forward to it. I think any time you can play three rounds at Pebble that's a great week."

Another Canadian is also in the hunt. Roger Sloan sits in a tie for 10th after rounds of 69 and 67.

David Hearn and Adam Hadwin will also play on the weekend.