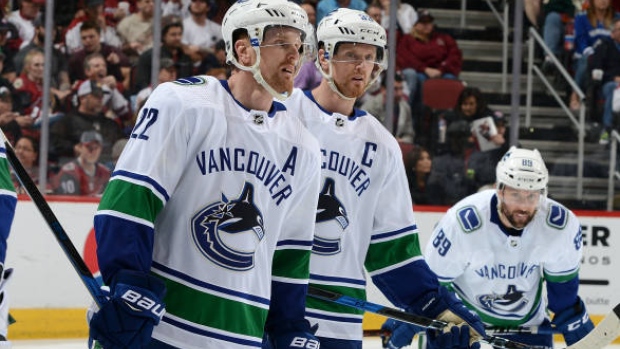 Banners with Nos. 22 and 33 have been popping up around Vancouver in the days leading up to Sedin Week, an entire homestand devoted to celebrating Henrik and Daniel Sedin.

What a scene it will be on Wednesday night as those numbers are raised to the rafters – the twins forever inseparable, as they were their entire careers.

It’s an honour the Sedins said they never could’ve imagined, given their start with the Canucks. The second and third-overall picks that GM Brian Burke orchestrated in 1999 were labelled busts, criticized as too small and too soft.

“Not at all,” Henrik Sedin said this week in an interview with TSN’s Farhan Lalji. “After the first few years, we didn’t really know what was going to happen. I think it’s pretty amazing that we’re sitting here today talking about our jersey retirement.”

The Sedins are Hall of Fame people. Their leadership, dedication to community and charity and belief in standing up and being accountable – even in the face of criticism – makes them first-ballot entries in that class.

But were the Sedins Hockey Hall of Fame-worthy players?

That debate will officially begin in 2021, their first year of eligibility. Unofficially, the debate is already underway, and their merits seem to place them squarely on the borderline, their case as unique as their symbiotic careers.

Even they don’t know what to make of their candidacies.

No set of twins has ever been inducted into the Hall at the same time. That’s the way it would have to be for Daniel and Henrik. There is no separating them.

They even finished with the exact same points-per-game ratio of 0.80. It’s incredible.

That joint entry might work against the Sedins in the eyes of the committee. A maximum of four players are allowed entry in each class; the Sedins would essentially need double the number of votes.

That uniqueness also might be their best argument. They seemed to share one brain on the ice, connecting on blind backhand passes with ease and grinding opponents with a cycle game that operated in perfect harmony. They partially changed the way the game was played with the high-slot tip they made en vogue.

“There’s no rocket science behind it,” Henrik said.

The Sedins dominated the NHL for a period of time, and they did it together.

Henrik led the league in assists for three straight seasons during the stretch where they won those back-to-back scoring titles. They each had five seasons at a point-per-game or better, while Henrik collected two first-team All-Star votes and Daniel nabbed one first and one second-team selection.

But the best argument against the Sedins’ selection for the Hall of Fame might be that their run of dominance was fleeting. The Swedish Twins, as termed in that memorable NHL commercial that still makes them blush, acknowledged this week that “we weren’t as strong as we needed to be” when they began their careers as teenagers from the legendary hockey town of Ornskoldsvik.

The Sedins averaged just 38 points per season over their first four years. Coupled with an average of 54 points over their final six seasons, that’s 10 of their 17 seasons played below what most would consider Hall of Fame-calibre production.

Their most unfavourable statistical comparison is fellow Swede Daniel Alfredsson. Both of the Sedins fall short of the long-time Senators captain in nearly every category: goals, points, points-per-game and postseason points-per-game. Like Alfredsson, the best the Sedins could do was one trip to the Stanley Cup Final.

“It’s something we’ll regret for the rest of our lives,” Henrik said of losing to Boston in the 2011 Stanley Cup Final. “But that’s part of hockey.”

Alfredsson and the Sedins did help Sweden win gold at the 2006 Olympics in Torino. Even with all of that on his resume, Alfredsson has been passed over by the Hall in each of his first two seasons of eligibility.

That isn’t to say Alfredsson won’t eventually be selected; it just illustrates the rightfully high bar that has been set.

And they seem to be perfectly comfortable with that. The resounding ovation they will receive as they are feted in Vancouver this week is more than they ever could have hoped for.

“We feel that we’ve done the best we can with our talent and our careers,” Henrik said. “We worked hard. We can’t say that we could’ve done anything more – training-wise or the preparation. That’s all we can do. What other people say about us, that’s up to them. They have to decide what they think of us. That’s how we think about it.”