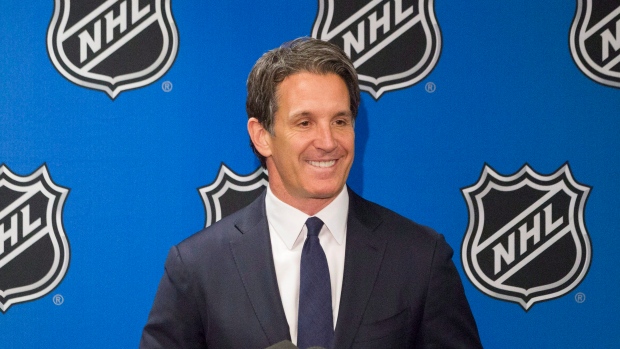 One of the interesting storylines percolating outside of the Stanley Cup playoffs concerns top prospects Auston Matthews, Patrik Laine, and Jesse Puljujarvi as they prepare for the 2016 NHL Entry Draft.

Even before the IIHF World Championships started, there was intrigue over how these names would come off the board in Buffalo next month. Matthews has long been earmarked as the first-overall pick, but because of his regional ties to the Arizona Coyotes, there has been discussion about whether this could be the year we see a blockbuster pre-draft deal for the top pick.

Make no mistake, Arizona wouldn’t be the only team trying to finesse their way into the top spot for Matthews. He projects as the prototypical first-line centre every team needs to win a Stanley Cup.

There’s another interesting wrinkle concerning Laine, who has been mind-numbingly good (again) for Finland at the worlds. There has been discussion about whether his performance over the last few months is enough to actually vault him past Matthews into the top spot. TSN Hockey Insider Bob McKenzie recently noted that there was no longer unanimity in the scouting community on who will go first overall. The large consensus is still Matthews, but it’s not an absolute slam dunk.

Either way, the Toronto Maple Leafs are in a fascinating position at the very top of the draft. They could keep the pick and take Matthews or Laine. They could trade down and still grab one of the two if they manage to finesse a deal that includes the second pick. They could try to slide down to the third spot and be guaranteed at least Puljujarvi. They could offer up the top pick for a king’s ransom, a haul that would act as a volume play more than anything else.

Because of this scenario, I thought it’d be interesting to look at the true value of that first-overall pick to establish what Toronto should consider as an absolute baseline for offers in any trade proposal.

The methodology here is straightforward: I looked at Adjusted Games Played (adjGP) for every player since 2000 by pick, weighting each pick based on the average number of career games played for that draft year. (The weighting treats every player as though he entered the league during the 2009 season so that each player across many draft years has the same number of available games to have played.) This gives us a pretty smooth indication of how effective players historically are at transitioning to NHL competition and places an expected value above a pick.

It’s worth noting that, because of the volatility, I did run regressions to optimize fit. This is important for obvious reasons. Take the eighth overall pick, for example. It’s a great spot to be for most teams, but in the decade we’re looking at it has been a (purely random) disaster. Braydon Coburn and Mikkel Boedker are nothing to sneeze at, but it gets pretty dicey thereafter.

Here’s how each pick looks in terms of adjGP by actual and regressed: 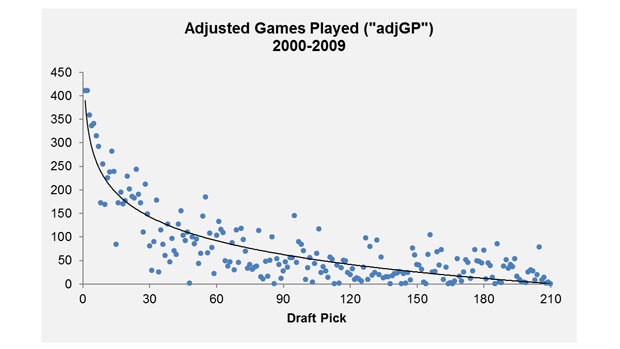 Why is this important? Well, from here, we can start to ascertain at what interval a trade scenario actually makes sense for the Maple Leafs. It’s putting math to the kinds of offers that are presumably thrown around on calls between general managers, and gives decision makers some confidence about acting in the best interest of their organization.

Let’s assume that the nine teams behind Toronto – Winnipeg through Colorado – are interested in moving up to the first spot. At what point does Toronto gain adjGP by moving the first-overall pick?

Well, first let’s look at how many adjGP each team can offer with their current first-round pick (I think a pretty good starting point, since I suspect Toronto won’t listen to a proposal without that asset being included). Here are the deficits each team is looking at: 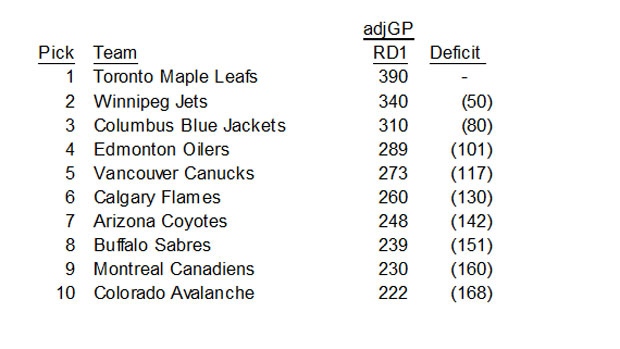 You can see that most teams, save maybe Winnipeg and Columbus, have a lot of ground to make up. A straight one-for-one swap – which obviously would never happen – means Toronto could lose hundreds of expected games played from their player.

So, how could teams realistically cover the gap? I’ve put together a few trade proposals aiming for break-even based on current draft pick availability. For the sake of this analysis we'll just consider pick-for-pick swaps – in reality, players could be embedded into these packages to sweeten a potential deal.

Let’s start with Winnipeg. They have a strong bargaining position because the second pick is pretty indiscernible from the first pick. They could hypothetically trade up one pick and add on a mid-round pick, and that trade would look pretty even:

But what if Winnipeg really wanted to go all-in in a shot for Matthews and Laine? It’s not impossible if Toronto had any interest in Winnipeg’s other first-round pick, which is 22nd overall.

How’s that for on the money? This is, at least by our adjGP metric, a fair deal. If Toronto was intrigued in a volume play for batches of picks over just one at the top, this would be a decent starting point.

Let’s turn to Arizona now, since they may have an understandable interest in moving up for the local phenom Matthews. Arizona is in a trickier spot, since their first-round pick isn’t nearly as valuable as Winnipeg’s. How could they finesse a proposal?

Maybe a slight overpay here, but considering the premiums most teams have to pay to move up at the draft, I think this might be the most reasonable package yet. This could, if you pay attention to the mock drafts, look something like Auston Matthews to Arizona in exchange for one of Alexander Nylander or Mikhail Sergachev plus one of Adam Mascherin or Luke Kunin.

Let’s do a fun one to finish. The Philadelphia Flyers are going to be busy at this year’s draft because they have 10 selections by way of a bunch of future deals finally coming to fruition. Let’s pretend that Philadelphia – similar to Winnipeg earlier – doesn’t want to part with their top pick. Is there something they could still piece together in order to incentivize Toronto enough?

That’s six draft picks for what I’d consider to be a fair Matthews (or Laine) cost. You’d have two in the second round, two in the third round, and two lottery tickets at the back end of the draft for the Leafs to try and strike gold once more.

While I do think it’s more likely than not that Toronto stays at one and selects Matthews with the pick, I don’t think it’s an absolute guarantee. Doubly so for a numbers-savvy Leafs organization that you can bet is doing the exact type of draft valuation exercise I went through here, looking for opportunities to accumulate a higher volume of picks (this is known as The Hoody Play).

This exercise is an important one for all teams, not just Toronto. Understanding pick valuation is critically important, and it’s why teams are dumping significant resources into people and programs that can provide decision makers with a road map that can help prevent them from getting fleeced the next time a big trade offer comes around.

Let’s see what happens in Buffalo on June 24.