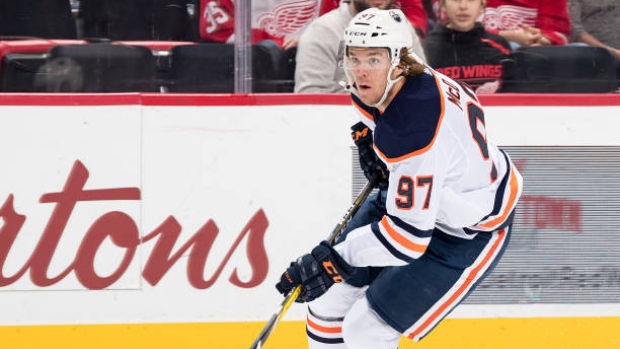 SAN JOSE, Calif. — Worthy or not? The hot-button debate about Connor McDavid’s worthiness of the Hart Trophy raged up until ballots were distributed last April.

It’s only January, but that discussion is beginning to percolate again.

Because if this season’s standings are any indication of how the rest of the campaign will play out, fellow voters from the Professional Hockey Writers Association may have some soul-searching to do about McDavid’s candidacy for the top individual honour.

Last year, voters spoke loudly and clearly with a mandate that has historical precedence: no playoffs, no Hart Trophy.

The Edmonton Oilers finished 17 points back of the pack for the second time in three seasons. McDavid finished six points clear of every other skater in the Art Ross race, but received just five first-place votes for the Hart. Former teammate Taylor Hall took home the honour; McDavid finished fifth in voting. But his fellow players awarded him the Ted Lindsay Award for most outstanding player.

This year, the Oilers limped into the All-Star break just three points out of the playoffs. Yes, it’s a historically low bar in the West this season. Yes, McDavid doesn’t lead the league in scoring.

But McDavid still did not appear on nearly half of the ballots (62 of 127) submitted by members of the PHWA this week in their annual Midseason Awards.

Tampa Bay’s Nikita Kucherov was the midseason Hart winner for the second year in a row, followed closely by Calgary’s Johnny Gaudreau. McDavid was a distant third to close out the group of finalists.

My midseason Hart Trophy ballot was the inverse order. I felt McDavid was the clear No. 1 choice because without him the Oilers had no chance of even sniffing the Stanley Cup playoffs at the halfway point. He has singlehandedly kept them in the race, practically dragged them to this point, kicking and screaming.

McDavid has 29 goals and 73 points in 49 games. He is four points off Kucherov for the scoring lead, already 19 points more than he had at the All-Star break last season. He has done all of that with a revolving door of linemates – flanked by Jujhar Khaira and Zack Kassian for a stretch this season – on a one-line team.

“The other team can sit back against one line and defend,” Oilers coach Ken Hitchcock said postgame Tuesday when asked if he has enough talent to coach a winning team.

That hasn’t stopped McDavid, who has no quit in his game. He doesn’t take nights off, even when most of his teammates fail to show up.

The question now for McDavid’s candidacy for the Hart is: If the Oilers don’t make the playoffs, how far out of it is too far?

The line was drawn at 17 points last year. Anything double digits will probably derail his campaign.

The last player to win the Hart Trophy on a non-playoff team was Mario Lemieux in 1987-88, when the Pittsburgh Penguins fell one point short of the playoffs. There are a lot of parallels between the start of Lemieux’s career with a disastrous Penguins franchise – one that didn’t make the playoffs in each of his first four seasons – and McDavid’s early run in Edmonton.

But what if the Oilers finish five or six points back? What then?

That will make for a fascinating conversation.

The Oilers have a lot of work to do to make it one. But if McDavid’s recent second-half surges are any indication, he could well haul them into the playoffs on his own.

As the games get notoriously tougher to win, McDavid gets better. He has torched the NHL after the All-Star break in each of the last two seasons. Last year, he closed with 53 points and 26 goals in 33 games.

There is plenty of time for ballots to change. For proof, Hall was not on anyone’s Midseason Awards radar at this same time last year. The question now is whether McDavid can change the stance of voters should the Oilers fall short again.