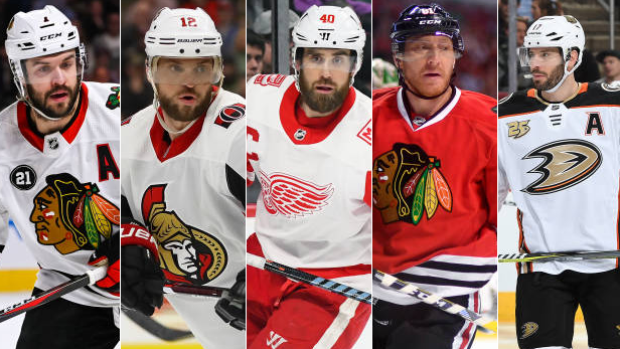 Every penny will count for the Leafs, who will be feeling the cap crunch this off-season with hockey’s loss of revenue from the COVID-19 pandemic likely to keep the cap flat at $81.5 million.

Toronto’s 2020-21 roster has already begun to take shape with inexpensive additions in Russian forward Alexander Barabanov and Finnish defenceman Mikko Lehtonen. Plus rookie winger Nick Robertson could win a job up front with his scoring touch and entry-level salary.

Yes, the contracts of Tyson Barrie and Cody Ceci will come off the books. But the Leafs are also losing two critical pieces of their salary cap puzzle in Nathan Horton and David Clarkson.

A Shakespearean tragedy could be written about those two star-crossed free-agent signings, both inked on July 5, 2013. They combined to play just 180 out of a possible 1,148 games over those total 14 contract years, with nearly 1,000 games on the injury list. Their contracts were been traded for each other, then Clarkson’s deal was later dealt to Vegas, before coming back to the Leafs in 2019 because Pridham could use it to Toronto’s advantage.

The Maple Leafs flexed their financial muscle in a weight class all of their own this season.

They spent more than $113 million in NHL salary alone, according to CapFriendly.com. No other NHL team was close to nine figures; only six others broke $90 million.

Much of that was due to the enormous signing bonuses paid out to Mitch Marner, Auston Matthews and John Tavares – the top three individual salaries in the league in 2019-20. They are also still paying 15 per cent of Phil Kessel’s salary for the next two seasons.

But the Leafs actual full-season cap hits still amounted to north of $95 million, well above the $81.5 million cap.

A big reason why the Maple Leafs were able to remain cap compliant was the long-term injury flexibility provided by Horton’s ($5.3 million) and Clarkson’s ($5.25 million) cap hits.

By inching as close to the $81.5 million cap as possible – Pridham got them within $11,000 on the eve of the season – the Leafs were then allowed to exceed the cap by an amount equal to the nearly the full combined $10.55 million cap hits of those two long-injured players.

That flexibility grew when Ilya Mikheyev and Andreas Johnsson went down with injuries and even allowed the Leafs to essentially purchase a 5th-round pick from Vegas to retain a portion of Robin Lehner’s salary ($249,000) on trade deadline day.

Now, with Horton and Clarkson mercifully sliding into the sunset, the Leafs will likely be on the hunt for replacement LTIR contracts to enjoy the same cap benefits.

Here are five potential candidates whose contracts the Maple Leafs could acquire this off-season:

Scoop: After grinding out 1,001 career NHL games, Kesler underwent an extensive right hip resurfacing surgery in May 2019. He acknowledged then that the surgery left the status of his playing career unknown. While Kesler continues to work out and no one has officially ruled him out to play again, the odds are against it, especially since part of Kesler’s hip needed to be artificially replaced. The key for the Leafs in Kesler’s case is both his relatively high cap hit and two years of term. It’s probably safe to say the retooling, dollar-conscious Ducks would be interested in adding a pick or asset to the fold for Kesler’s contract, but he would need to waive his no-move clause to make it happen. That 80 per cent of the $13.3 million remaining to be paid out is covered by insurance makes it easier for the Ducks to entertain more cap-strapped teams than just the Leafs.

Scoop: Gaborik hasn’t skated for the Sens once in these past two seasons after undergoing surgery to repair a herniated disk in his back in April 2018. Gaborik’s contract is insured, so he cost Ottawa just $600,000 this season in real dollars to chew up nearly $4.9 million in cap space as insurance that they’d get to the salary cap floor (minimum spending requirement) of $60.2 million. Assuming the floor stays the same, the Sens aren’t likely to need any more assurance in that case, since they have already $42 million on the books for next season and just four NHL forwards and one goalie under contract. That makes Gaborik’s deal expendable. For a division rival like the Leafs, it may cost more to get Gaborik’s contract, but that cost will be tempered by the fact there is just one year remaining.

Scoop: The Red Wings announced in Sept. 2018 that Zetterberg would be unable to continue his NHL career due to a degenerative back condition. He’s remained a part of their salary cap structure for these last two seasons as the Wings have dug out of cap hell. They still needed to use LTIR space this season to ice one of the worst teams of the cap era. That is over now. GM Steve Yzerman has only a couple cumbersome contracts remaining and plenty of cap space to reshape his team. Zetterberg’s contract won’t do Detroit much good, short of getting back a pick or prospect for it. But the truth for Toronto is that with just $1 million owed in real dollars on Zetterberg’s back-diving deal, his contract might be worth much for a different budget-minded club in a cap crunch.

Scoop: Now 41, Hossa has been living in his native Slovakia for the past few years after being unable to play as a result of a "progressive skin disorder." League doctors confirmed the validity of his injury, even though skeptics pointed out he walked away from the NHL after earning 94 per cent of his back-diving, $63.3 million contract. With a sizeable cap hit and just $1 million owed in real salary, the Coyotes acquired Hossa’s contract in 2018 and have also used it as a mechanism to exceed the cap. But it may not be required next season. Arizona has just $61 million committed and most of its key players are re-signed. If the Coyotes somehow find a way to keep Taylor Hall, or go on a spending spree, Hossa’s contract could prove valuable once again. With only one year left, it would also be of limited use to the Leafs.

Scoop: Seabrook underwent right hip surgery in February, his third operation – including his left hip and right shoulder – in a span of two months. But talk to those close to Seabrook and his motivation to keep playing has not waned. He’s told friends that he is moving as well as he ever has after connecting with a new trainer in the Chicago area. So, his inclusion on this list may well be premature. In fact, there is a chance Seabrook could be ready to return whenever the NHL does, especially if this pause drags on into August. Still, there has been no shortage of question marks about whether Seabrook will be able to continue after so much wear and tear. So while his term and relatively high cap hit would make him the most intriguing contract acquisition for the Leafs, his status as a true LTIR candidate might throw a wrench into that. Stay tuned.