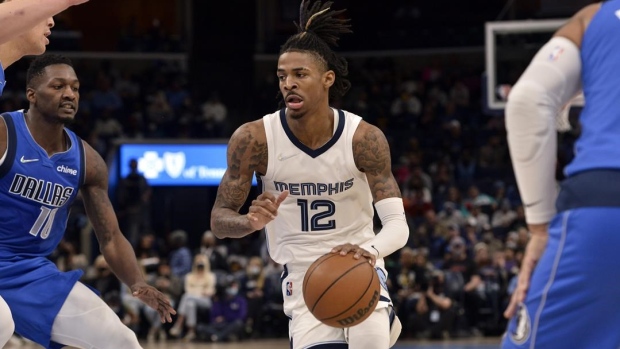 A season that started with All-Star goals for Memphis guard Ja Morant have grown far beyond that.

The third-year point guard has emerged as a legitimate MVP candidate.

Opposing coaches use words like “special,” a “true All-Star” and “one of the NBA's best players period” to describe Morant.

“I don’t know any other way to put it," Lakers assistant coach David Fizdale said. “The guy is a superstar. I don’t see anybody that’s had a real true answer for the guy. What he’s done against some of the best teams in the league, the best defensive coaches, the best defensive minds, has been really impressive.”

Morant has had high expectations since Memphis drafted him with the No. 2 overall selection in 2019. He helped end a playoff drought leading the Grizzlies to play-in wins over San Antonio and Golden State to earn the No. 8 seed before Memphis lost to Utah in five games to cap his second season.

Now he's helped Memphis become one of the NBA's best. The Grizzlies have won of 22 of 27, including 12 of the last 13, and only Phoenix has more wins than Memphis' 31 tied with Golden State. Memphis also has road wins over both the Suns and Warriors this season.

And Morant is a major reason why.

Morant has improved his scoring each of his first three seasons, and he is averaging a career-high 24.4 points a game along with 5.7 rebounds and 6.7 assists. He joins Stephen Curry, LeBron James, Luka Doncic and Nikola Jokic as the only NBA players averaging at least 24 points, 5 rebounds and 6 assists a game.

Curry, James and Jokic have a combined seven MVP awards.

“I’ve been working to be in the position that I am right now," Morant said after becoming the only NBA player this season to win consecutive pIayer of the week awards. “I’ve just got to continue to keep playing my game. Continue to be aggressive out there on the floor and do whatever it takes for us to get a win.”

Coaches around the league are taking notice.

Spurs coach Gregg Popovich said Morant reminds him of Tony Parker with how easily the Grizzlies guard gets to the rim no matter what a team does to try to stop him.

“He also has a little mid-range game with the floater, he’s starting to shoot the three ball well, his speed is uncommon and when you put all those things together and add unselfishness and competitiveness to that, you’ve got a hell of a player on your hands," Popovich said.

Morant has ramped up his scoring to a new level as well.

He became the first player ever to score at least 40 points in back-to-back games against a team led by James in the same season and the first player since the merger with consecutive 40-point double-doubles against the Lakers, according to Elias Sports Bureau. The Grizzlies won both.

Morant came into the NBA showing the ability to slice to the basket or drive to the paint before dropping in a floater. He keeps increasing the creativity, including a spinning move after leaving his feet for a layup late in Monday's 119-106 win over Chicago.

He's also third in the NBA averaging 14.8 points per game in the paint. The guard uses his speed to zoom down the court to finish fast breaks, putting him second in the league averaging 4.3 points per game.

What other coaches are saying:

“We caught him last year on kind of a lull, and he struggled in a few games when we were here,” Kerr said. "Even though he was great over the course of the year, I think he’s (consistent) night in and night out and that’s the sign of a true all-star, top level player, which he is.”

Morant spent the offseason working on his game, especially his 3-point shot. He's shooting a career-best 35.5% beyond the arc.

“The young man can carry a game,” Casey said. “He can control a game with the basketball. He’s smart, he’s gritty, he’s tough, so that’s what worries you the most about the Memphis Grizzlies right now.”

“At the end of the game, he can make the tough shots, draw the contact, make the right play,” Finch said. “He can get to the rim and make the shot in the paint and has great closing ability. The athletic package, the speed and the size. There’s a lot of things to admire about what he does.”

That's why the Grizzlies turn to Morant needing a bucket at the end of games. Morant drove through three Suns for the winning bucket Dec. 28 in the final second on the clock and says he welcomes that pressure.

“It feels like that’s when I shine the most,” Morant said. “I like to be the one to take that shot, make or miss, just have to deal with it. I can’t help it.”