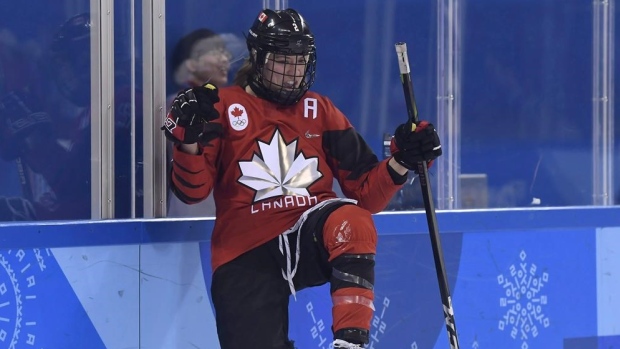 Boy or girl, Meghan Agosta was going to name her first child Chance.

The name represents the chances Agosta sees in her life to combine motherhood, policing and hockey.

The 32-year-old forward from Ruthven, Ont., will pull her Canadian jersey over her head Saturday in an international game for the first time since the 2018 Olympic women's hockey final in Pyeongchang, South Korea.

Canada and the United States open their five-game Rivalry Series on Saturday in Hartford, Conn.

Game 2 is Tuesday in Moncton.

Agosta, a four-time Olympian and three-time gold medallist, is the leading scorer on the national team among active players with 85 goals and 91 assists in 176 career games.

"Put hockey and policing aside, that was probably the biggest challenge for me to have to go to the hospital every single day and leave there without her," Agosta told The Canadian Press from Hartford.

Her life is a lesson in time management after returning from maternity leave last month to her job as a constable in the Vancouver Police Department.

"Having a little girl is definitely a blessing in itself," Agosta said. "I'm still not done playing. I know I have a lot more to give. Now my life is an even bigger challenge."

"It's not only going back to working shift work, sleeping, eating and training at different times, but I do have Chance and I have my two stepsons," she said. "That's our family.

"On top of that, training to try to be the best I can be every single time I put on that Canadian jersey, it hasn't been easy. Knowing myself, I've done everything I could to be at the top of my game."

Agosta isn't alone in returning from a season hiatus.

Three-time Olympian Meaghan Mikkelson of St. Albert, Alta., will also play her first game for Canada since the 2018 Olympic final.

She and husband Scott Reid had their second child, a daughter named Berkley, in January.

So the 34-year-old defender already knew the hard work it would take in the gym to be ready to play again this year.

"I think I said to (teammate Natalie) Spooner a couple of weeks ago 'I'm 34 years old. I've been on the team for 12 years and I've had two babies and I think I'm the strongest and fittest I've ever been in my life,' Mikkelson said.

"I don't know if it's the mom strength kicking in. Physically, mentally I think I'm the strongest I've ever been in my career."

A pair of prominent American players are also returning to their national team after a season away for childbirth.

Twin sisters Jocelyne-Lamoureux Davidson and Monique Lamoureux-Morando scored the shootout winner and the tying goal in regulation respectively against Canada in the 2018 Olympic final.

"You can have a baby and you can still continue to have a career in your sport," Mikkelson said.

"More and more sport federations are stepping up to provide the support that you would need as a mom to be able to do that. It's a great movement for female sports I think."

The players have returned to a changed women's hockey landscape.

Mikkelson did not have a team to come back to when the Canadian Women's Hockey League folded in March and took her Calgary Inferno with it.

She's among the 200 women in the Professional Women's Hockey Player's Association (PWHPA) who are barnstorming across North America playing exhibition games and occasional tournaments against each other.

The union wants to establish grassroots support for a sustainable professional women's league. The players don't believe the U.S.-based NWHL is sustainable and thus refuse to play in it this season.

"Taking the full year off and not playing any games then and then not having played a ton of games yet this season, I think that's been a challenge," Mikkelson said.

"I definitely would have liked to have played more games, but at the same time, there's nothing that really replicates playing against the Americans, which I've done many, many times throughout my career.

"I take comfort in that, knowing that I personally think I play my best game against them. I'm feeling very confident going into the series that I'll be able to bring my best for the team."

The Rivalry Series continues in 2020 with games Feb. 3 in Victoria, Feb. 5 in Vancouver and Feb. 8 in Anaheim, Calif.