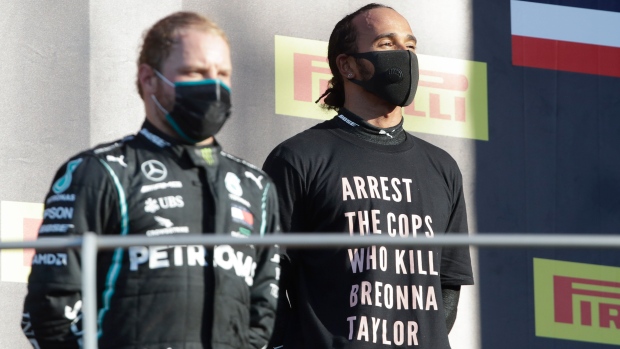 An FIA spokesperson said an investigation into Lewis Hamilton's Breonna Taylor T-shirt has been ruled out, according to multiple reports.

The 35-year-old Hamilton wore a shirt depicting the 26-year-old Taylor, who was shot dead by Louisville, KY police in March, during the pre-race anti-racism demonstration ahead of the Tuscan Grand Prix and again on the podium following his victory on Sunday.

The shirt read "Arrest the Cops Who Killed Breonna Taylor" along with "Say Her Name."

Hamilton, meanwhile, took to Instagram Tuesday to say he won't let up.

“Want you to know that I won’t stop, I won’t let up, I won’t give up on using this platform to shed light on what I believe is right. This is a journey for all of us to come together and challenge the world on every level of injustice"

Hamilton has won six of the nine races so far this season and appears on course for a seventh Formula One Driver's Championship that would equal the current record held by the legendary Michael Schumacher.

Next up for the circuit is the Russian Grand Prix set to take place on Sept. 27. Hamilton is a four-time winner of the event and has won the last two races in Sochi.