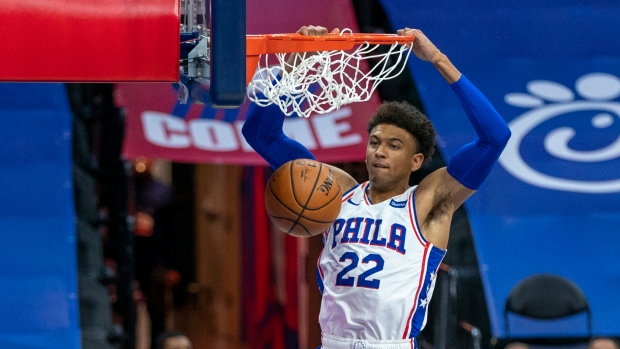 We are officially past the quarter mark of the NBA fantasy season, enough of a sample to know what players have been as advertised, pleasant surprises or unfortunate busts.

In the case of failed draft picks, it may be time to cut bait and explore some options on the wire. Here are some options to get you through this week.

Thybulle finally returned after missing seven games due to health and safety protocols, but he shouldn't be on your wire. Thybulle is a stock monster (2.2 steals, 1.6 blocks) and his efficiency won't hurt you in any way (48.9 per cent shooting, 0.9 turnovers) He's a lock in the 76ers rotation and will push Shake Milton to the periphery.

The Nets are hurting a bit with Joe Harris (ankle) and Bruce Brown (hamstring) on the sidelines. Mills has taken advantage of their absences and has been on a tear in the past four games: 20.0 points on 56.9 per cent shooting, 5.3 triples, 2.3 assists and 1.3 steals per contest. The 33-year-old veteran guard isn't going to remain this hot, but you might as well have a stake in this production while he's blazing.

Burks is coming off a nice week, averaging 14.0 points, 3.3 triples, 3.5 rebounds, 1.8 assists and 1.5 steals per game. The 10-year veteran is offering useful production at the moment as a creator/scorer off the bench, so ride the wave while he's hot.

Love's always a risk to end up in street clothes on any given night, but Evan Mobley is on the shelf and Lauri Markkanen is still working his way back into the lineup. Love's seeing a usage rate of over 26 per cent in his past two games, and the Cavs are starving for offence. If he can play somewhere in the low 20's every night, he'll serve up points, rebounds, and threes.

KCP came up big in a win against the Heat on Sunday with 16 points and five triples. He's a target reserved for the deepest of leagues, but he's earning 30 minutes a night on the season and can occasionally get hot to give you points and threes. The schedule this week doesn't hurt either, with the Wiz facing two bottom-third defences in the Hornets and Pelicans.