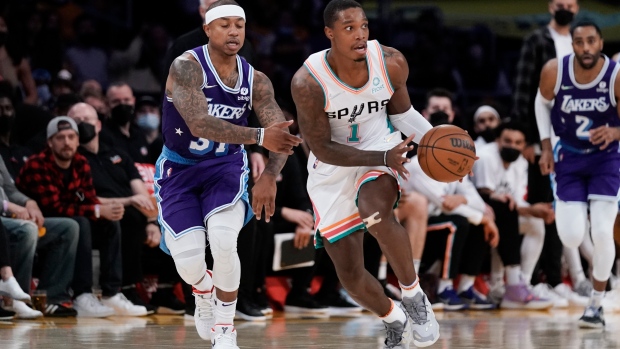 It's been a tumultuous few weeks in the NBA due to the ongoing pandemic.

Nearly a dozen games have been postponed, and a countless number of players have entered the league's health and safety protocols.

The good news is that the landscape appears to be getting back to normal, and hopefully the season can finish in somewhat standard fashion.

With that said, the fantasy grind never stops as long as there are games on the schedule, so here are five players to look at this week.

*Note that I've indicated their rostered percentage in ESPN leagues in brackets.

Projected by many to have a big 2020-2021 season, White had a disappointing campaign, ending with an injury to his left shoulder that required surgery and months of rehab. White's return to a new-look Bulls team this season started off slow, but key absences have seen an uptick in his playing time, and he's taking advantage. In 10 games since Dec. 19, White's averaging 16.2 points on 50.9 per cent shooting, 2.8 triples, 3.3 assists and 0.7 steals. It remains to be seen what his minutes will look like with Alex Caruso back in the fold, but White's offensive punch is too good to overlook right now.

Many owners cut ties with Melton once Dillon Brooks returned from injury in November, and some lost patience once Melton entered protocols. Brooks is going to miss the foreseeable future with an ankle sprain, so Melton has chance to earn more burn. He’s a unique player who can fill up the stat sheet, as evidenced by his pre-Brooks numbers this season: 12.4 points, 2.2 triples, 4.4 rebounds, 2.5 assists, 1.6 steals, 0.9 blocks.

Derrick White, Devin Vassell and Keldon Johnson are all currently in protocols, so Walker will be relied upon as long as the Spurs are short-handed. Walker responded to an increase in minutes against the Nets on Sunday, putting up 25 points, three triples, three rebounds, four assists to go along with a steal and a block. That performance is good enough to roll the dice on Walker with a four-game week in hand.

Harris isn’t the most reliable player at this point in his career, but he's logging a ton of minutes in Orlando with Jalen Suggs injured. Over the past two weeks, Harris is playing 35 minutes a night while racking up 17.3 points, 3.1 triples and 1.4 steals. These are top-100 numbers, and Harris deserves to be rostered as long as he’s seeing the court this much.

A short-term, deep streamer, Okongwu’s value is based on the availability of Clint Capela, who's currently out with an ankle injury.  Okongwu started against the Clippers on Sunday and grabbed a season-high 10 rebounds. He also had a couple multi-block games prior to the new year, so he's worth a gamble if Capela continues to sit.