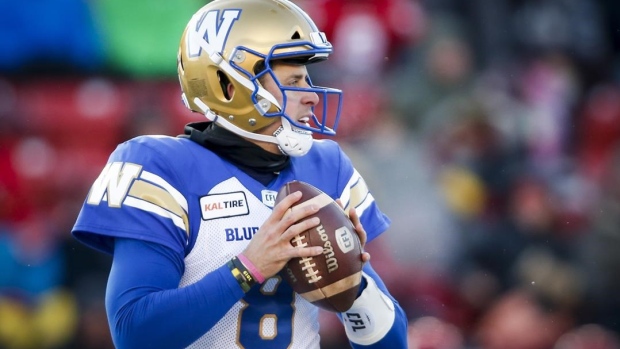 WINNIPEG — Zach Collaros will be fuelled by more than playoff excitement on Sunday.

The Winnipeg Blue Bombers starting quarterback will lead his new team against the Saskatchewan Roughriders, an opponent that discarded him earlier this season, in the CFL West Division final.

"I don't think I'd be human if I didn't say there was more motivation, for sure," Collaros said after Winnipeg's practice Wednesday.

Collaros, 31, was starting his second season with the Riders when he suffered a concussion during the first drive of the team's season-opening loss to Hamilton on June 13. He was traded to the Toronto Argonauts in late July and never got into a game.

Winnipeg picked him at the Oct. 9 trade deadline as insurance behind Chris Streveler after starting pivot Matt Nichols had season-ending surgery in late September on a shoulder he injured the month before.

Collaros got the opportunity to get his career back on track in Winnipeg's regular-season finale against Calgary. Streveler was injured the week before with what multiple media reports said was an ankle injury and broken bone in his foot.

The eight-year veteran led his new team to a 29-28 win to finish 11-7. That was followed by a 35-14 victory over the Stampeders in last Sunday's division semifinal when he and Streveler presented a one-two pivot punch.

"Things happen," Collaros said. "If there's anything I've learned in this league it's that things can change quickly. This is where I find myself now, and it's a great opportunity for us."

Even though Streveler was in street clothes for Wednesday's practice, Bombers head coach Mike O'Shea said he expects he'll be "good" for the contest between the long-time rivals.

When asked about the extra motivation Collaros has, O'Shea understood where it came from.

"Everybody wants to win and they want to win all the time, but I don't know that you can escape or deny that there will be some feelings whenever you play an old (team)," O'Shea said.

The Riders handed the reins to quarterback Cody Fajardo after Collaros was injured. The four-year CFLer helped guide Saskatchewan to a division-best 13-5 record and was voted the West's most outstanding player.

"We've exchanged texts throughout the season," Collaros said of Fajardo. "Whether it's something happening for me or something good happening to him, we're friends."

Bombers receiver Nic Demski played the first three seasons of his five-year career with Saskatchewan before his hometown team signed him as a free agent in 2018.

"When a team lets you go, obviously you have a little bit of tension there, I guess you could say," Demski said. "But at the end of the day, Zach's a pro.

"He's been through this process before so I don't think he's going to let his emotions overcome what's at stake here."

Demski described the duo of Collaros and Streveler as a "two-headed dragon."

Collaros completed 11-of-21 pass attempts for 193 yards and a touchdown strike to Darvin Adams in the semifinal win over Calgary. Streveler didn't throw a pass, but he ran 13 times for 82 yards, including a 24-yard TD effort that left him limping a little bit at the end of the game.

Bombers running back Andrew Harris, who finished with 14 carries for 57 yards against the Stamps, is expecting Streveler to play Sunday.

"That's a tough SOB, man," Harris said of the sophomore pivot. "He plays with a certain attitude and a certain fire and it's definitely inspiring. It's great to be around, great to have a teammate like that and definitely someone you can feed off of."

Sunday's tilt will be the first division final between the Bombers and Riders since 1972. Saskatchewan won 27-24 on a last-second field goal by Jack Abendschan after Riders quarterback Ron Lancaster led a comeback from a 24-7 deficit.

"It's a game of pretty big magnitude," Collaros said of the upcoming clash. "But again, we have to treat it like every other game, do our best to execute our game plan and let the chips fall where they may.