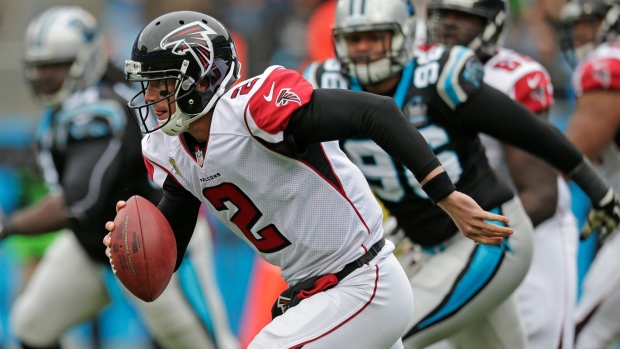 FLOWERY BRANCH, Ga. - Matt Ryan has no plans to become a running quarterback.

He does intend to use his legs more in the Atlanta Falcons' new offence.

After Ryan took a brutal beating the last two years sitting in the pocket, the Falcons want to get their star quarterback moving around a bit more. He'll be rolling out, looking to make plays on the edge, and even getting the green light to run if there are some yards to be had without taking a big hit.

"I think he's got some sneaky athleticism that people don't really know about," quarterback coach Matt LaFleur said Monday. "He is able to get out of the pocket and create some plays on the edge."

"He's nice to say that," the quarterback said, before turning serious. "I've always felt like I can move pretty well. When I get outside the pocket, I always feel like I can extend plays and make plays. We've done that around here in the past. Maybe not so much as some other guys around the league, but certainly well enough to do it pretty effectively. I feel like it's an offence that suits my game pretty well."

At age 30, Ryan can't continue to take the sort of pounding he endured while being sacked 31 times a year ago and 44 times in 2013. Just as troubling, he took 88 hits after getting rid of the ball over than two-year period, and was hurried a staggering 359 times.

That means he faced some sort of pressure on nearly 39 per cent of his passing attempts.

Ryan and the Falcons' new coaching staff realize that must change. They're hoping a zone-blocking scheme and improved running game will also help make things a bit easier for their franchise quarterback.

"For him to be able to attack the perimeter when it's there, when there's some yards where he can get down without contact, that's what we're looking for," head coach Dan Quinn said. "We're not trying to make him into a zone-read quarterback. But when there is room for him to run, we'll encourage him to do that."

After looking impressive during a brief appearance in the Falcons' first preseason game against Tennessee, Ryan might get a chance to show more of his mobility when the Falcons face the New York Jets in a preseason game Friday night.

Not that he feels like this is anything new.

"We did a lot of it early on in my career," Ryan said, recalling his time with former offensive co-ordinator Mike Mularkey. "It just wasn't a big point of emphasis for us the last couple of years. I certainly feel comfortable doing it. I feel like it adds another dimension to our offence."

Ryan is not concerned about putting himself more at risk of getting injured.

Heck, it can't be much worse than the last two seasons.

"It's a physical game," Ryan said. "I've got to be ready to go. That's what you train all off-season for, trying to get yourself in the best shape possible. For me, what it's all about is trying to make us the best offence we can be."

Notes: RBs Devonta Freeman and Tevin Coleman, who both missed the preseason opener because of hamstring injuries, were back at practice Monday in a limited role. They both did some running and took part in individual drills before sitting out the team portion of the nearly two-hour session. The Falcons aren't sure if they will be ready to play against the Jets. "As we go through the week, I think we will have a good sense for it," Quinn said. "We're certainly hoping to have them back, but we'll only put them out there if they're ready to rock." ... Hall of Famer Bruce Smith was at practice, providing tips to young defensive linemen such as Ra'Shede Hageman. Quinn said he even learned a few things from the former Buffalo Bills great. "We sat down for a half-hour and I just listened to him talk about the pass rush," the head coach said. "I got better today from being around Bruce. What an honour to have him here to work with our guys for just a short time."