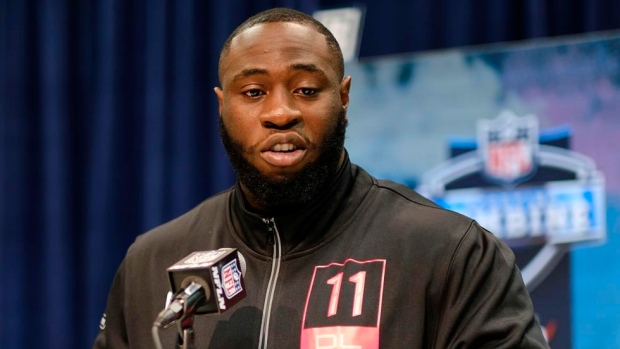 The burly six-foot-three, 302-pound defensive tackle is strutting his stuff this week at the annual NFL combine in Indianapolis. It's an opportunity to not only work out before league coaches and GMs but also speak to them and potentially boost his stock for the NFL draft April 23-25 in Las Vegas.

But for Gallimore, an Ottawa native, the combine is also a chance to repay his family for the sacrifices made to get the former Oklahoma Sooners standout to this point.

"If you understand my family, my parents, what they've been through, the sacrifices they made for me and my older brothers, it's no secret as to who or what my why is," Neville said in an interview with SiriusXM NFL Radio on Thursday from Indianapolis. "I have an opportunity to not only change my life but really just pay back in some way for the sacrifices they made for me.

"That's why I'm so grateful for this opportunity because this is a big deal."

Gallimore left Ottawa as a youth to attend the Canada Prep Academy in Welland, Ont. Gallimore's mother, Merdiva, and two brothers all helped to pay the tuition so Gallimore could attend the school.

The family's sacrifices paid off as in 2015 Gallimore played in the U.S. Army All-American Bowl, becoming the first Canadian to do so. After receiving over 30 collegiate offers, Gallimore committed to the University of Oklahoma.

A red-shirt freshman, Gallimore started all 14 of Oklahoma's games as a senior last year, registering 30 tackles, 7.5 tackles for a loss and four sacks. He was named a first-team All Big-12 selection after being an honourable mention in 2018.

Oklahoma posted a 12-2 record last season, losing to eventual NCAA champion LSU 63-28 in the Chick-Fil-A Peach Bowl on Dec. 28 in Atlanta. Gallimore had three tackles in the contest.

Over his collegiate career Gallimore started 27-of-52 games at Oklahoma, accumulating 148 tackles, 18 tackles for a loss and nine sacks. ESPN draft guru Mel Kiper has projected Gallimore as a 2020 second-round draft pick although in one mock draft Gallimore was a late first-round pick.

"He gets penetration," Kiper said. "He was a guy I thought really popped in some games.

"He really impressed me, so I would think second round for Gallimore."

And Gallimore drew a rave review from host Charlie Weis — the former New England Patriots offensive co-ordinator and Notre Dame head coach — after answering a question regarding whether he gets frustrated watching a teammate record a sack while he's being double-teamed.

"If we're talking like that I never get frustrated because I understand I'm in the trenches, I'm an interior defensive lineman, Gallimore said. "If I'm commanding those double, triple teams I know one of guys will make the play so it also works in my favour.

"I always love the fact if I'm still being disruptive with two, three guys on me I feel like a lot of people they don't see the stat behind it but you know you watch ball, you can see."

"That's a very unselfish answer," he said. "That answer will go a long way with pro guys this week.

"That's a good answer because now you're not making any excuses for not having numbers. What you're saying is you don't care about the numbers. If you're doing your job, it's allowing somebody else to make a play. I like that answer."

Canadian football officials have also noticed Gallimore. He was ranked No. 1 in the CFL Scouting Bureau's 2020 draft prospect rankings last posted in December.