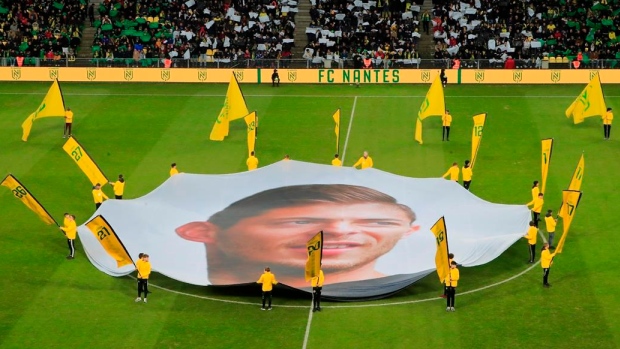 PARIS — Nantes fans paid an emotional tribute to Emiliano Sala before Sunday's home game against Bordeaux, a year after the Argentine striker's death in a plane crash shook the soccer world. Paris Saint-Germain star Neymar paid a tribute of his own to NBA great Kobe Bryant after scoring against Lille.

Sala died after the single-engine aircraft carrying him from Nantes to his new club Cardiff crashed near the Channel Island of Guernsey on Jan. 21 last year. His body was recovered from the wreckage two weeks later. He was 28 years old and entering his prime years as a striker. The pilot, David Ibbotson, also died.

A giant picture of Sala was displayed on the centre circle before the French league game at Stade de la Beaujoire and footage of him playing in the traditional yellow and green of Nantes was shown on a giant screen to gentle background music. Fans looked on in respectful silence, some holding up jerseys with Sala's name on the back.

After nine minutes of Sunday's game the crowd chanted Sala's name at length. Sala wore the No. 9 shirt for Nantes with great pride, and the number has since been retired by the club.

Nantes players wore a special blue and white jersey in the colours of Argentina's national team for the game against Bordeaux, the club where Sala started his career after coming to France 10 years ago after doing well at the Proyecto Crecer youth academy in San Francisco, Argentina.

Nantes said profits made from selling the commemorative blue and white outfit will be allocated to Sala's former clubs in Argentina.

Bordeaux won 1-0 with veteran forward Jimmy Briand scoring. Nantes had its Brazilian midfielder Andrei Girotto sent off early in the second half. Nantes is in sixth place and Bordeaux is 10th.

The fans chanted Sala's name again for several minutes near the end of the game.

“He’s still in our thoughts,“ Nantes captain Abdoulaye Touré said. “We wanted to win this match for him but we didn’t manage to.“

Sala netted 48 goals in 133 games and was a fan favourite because of his hard work and unselfishness.

His imposing stature, heading prowess and ability to play back to goal prompted Cardiff - which was then in the Premier League - to agree a club-record 17 million euros ($19.3 million) to sign him.

Hours before the plane crash, FIFA had received an online document from the Welsh soccer federation to complete transferring the player's registration from France.

Since Sala's death, Nantes and Cardiff have been involved in a dispute over transfer fee payments. Last year, Cardiff filed a court appeal seeking to overturn a FIFA order that it must pay Nantes a 6 million euro ($6.7 million) first payment for Sala. FIFA ruled in favour of Nantes and warned Cardiff it faces a transfer ban of three trading windows if it refuses to pay when the case is settled.

After scoring a penalty against Lille, Paris Saint-Germain star Neymar held up two fingers on his right hand and four fingers on his left to make Bryant's famed No. 24 jersey for the Los Angeles Lakers.

Bryant, basketball's 18-time NBA All-Star who won five championships and became one of the greatest basketball players of his generation during a 20-year career with the Lakers, died in a helicopter crash Sunday. He was 41.

Neymar, who said after the game that he knew Bryant, looked solemn-faced as he held his fingers up to the camera on the side of the field. He then clasped his hands together in a prayer sign.

Earlier, Neymar had scored a superb goal in the 28th minute as league leader PSG won 2-0 to move 10 points ahead of second-place Marseille.

Speaking to French broadcaster Canal Plus after the game, Neymar explained why he dedicated his second goal of the night to Bryant. He scored in the first half but at this point he hadn’t found out about Bryant’s death, which he learned in the locker room at halftime.

“I went to look at the messages on social media at halftime, I found out that Kobe was dead,” Neymar said on TV through a translator. “It’s very saddening for the world of sport and for all of us. Not only for basketball fans but for everything he did for the sport. I knew him and made this celebration for him, for his number. I hope he rests in peace."

Last season PSG lost 5-1 at Lille for the heaviest defeat for Qatari owners QSI since they took over the club in June, 2011.

Lille matched PSG in the first half and went close to scoring when Brazilian winger Luiz Araujo's fizzing strike drew a fine save from goalkeeper Keylor Navas.

But Neymar gave goalkeeper Mike Maignan no chance, curling a shot into the top right corner from the edge of the penalty area after expertly chesting down a high pass and swapping quick passes with midfielder Marco Verratti.

Neymar slotted in the penalty in the 52nd following a Lille handball.

Karl Toko Ekambi netted on his Lyon debut in a 3-0 home win against last-place Toulouse.

The Cameroon striker, who joined from Spanish side Villarreal, completed the scoring in the 77th as fifth-place Lyon maintained its unbeaten start to 2020.