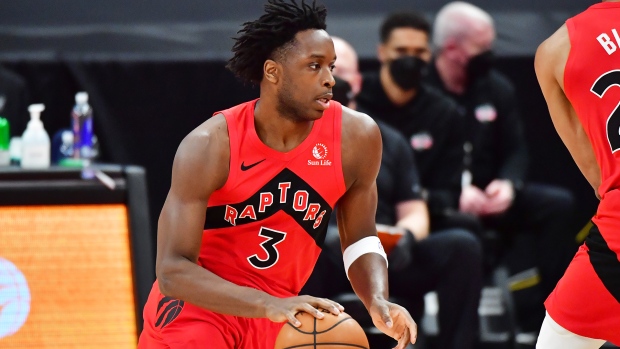 We are back with a full 82-game season after registering two of the most bizarre seasons in NBA history.

As it goes every year, free agent signings, trades, injuries and rookies entering the league create ripple effects across the fantasy landscape.

The closer you draft to NBA tip-off, the more certainty you’ll have. Kyrie Irving’s status keeps tumbling with each passing day in Brooklyn. Ben Simmons’ return to Philadelphia seems temporary at best. More and more news trickles in every day, such as unexpected injuries to Zion Williamson or Caris LeVert.

If you’re stuck drafting in the immediate future, here are 12 leans from the TSN Edge staff to consider:

Fox is morphing into one of the league's best bucket getters. He raised his scoring average from 21.2 (19-20) to 25.2 (20-21) while shooting virtually the same from the field (47.7 FG percentage). Efficient volume scorers aren't easy to find, and he has the keys in Sacramento. The knock on Fox is his free throw shooting, but he closed the last two months of the 2020-21 season hitting over 76 per cent from the stripe, a great improvement over his career mark of 71.8 per cent. He also bested in March and April: 28.4 points on 49 per cent from the field to go along with 6.8 assists, 3.9 rebounds and 1.8 steals. Hopefully this year Fox owners won't have to cringe every time he's fouled.

This Chicago team is going to fly on offence and Ball will be the engine pushing things down the court. Last season, he jumped into the top-50 improving his scoring across the board. He averaged 3.1 threes after scoring 2.3 the season prior. He elevated his field-goal and free-throw percentage from 40.3 and 56.6 to 41.4 and 78.1.

Ball has an upgraded offensive unit surrounding him which should yield a boost in assists and three-point opportunities. Always an underrated defender, he will be tasked with leading this team on that end of the floor and has yielded some promising returns averaging 2.7 steals and 2.3 blocks in three preseason games.

After four preseason games shooting 52-54-92, Raptors fans are going to be impressed with Anunoby’s offensive improvement. Almost half of his field-goal attempts were beyond the arc which could take him close to 3.0 threes a game (top-20 in the NBA).

With Kyle Lowry gone and Pascal Siakam not returning until November, Anunoby will have the chance to lead this young Raptors squad as the primary offensive option while maintaining his role as the lockdown defender against opposing superstars.

If he can maintain the defensive production, he projects as one of the most efficient ‘3-and-D’ players in the entire league.

A top-30 season is well within range.

A sixth overall pick in the 2018 NBA Draft, Mo Bamba came into the league with a lot of hype that so far hasn't translated into a fruitful career. It does look like Bamba's turning a corner though. He finished the 2020-21 season strong and it's carried over into this preseason. He's averaging 12.0 points, 7.7 rebounds, 3.3 blocks and 1.3 threes in only 20 minutes. He appears to be reading the game better and is feasting on alley-oops and putbacks. Wendell Carter Jr. may get more minutes at the five, but I see Bamba being more valuable in fantasy. Top-75 value isn't out of the question for him in 9-cat leagues.

Labelling Mitchell a bust is a bit unfair. He's a great "real-life" player and prolific scorer (26.4 points in 20-21). The issue I have is that Mitchell is unjustifiably drafted too high. Aside from points and triples, the rest of Spida's fantasy offerings don't add up. His shooting is below average (43.9 career FG percentage) and he offers little in defensive numbers, averaging no more than a steal the least two seasons. Mitchell was 5th in the NBA in usage for those with significant minutes last season, but only ranked 44th in the league in assists (5.2) He's plateaued numbers-wise, so what you see is what you get at this point.

Westbrook had some eye-popping pre and post all-star weekend splits in 2020-21.

Perhaps you trade for him mid-season in L.A.? He’s truly a 1-of-1 in the NBA. But in 9-cat fantasy leagues, how do you manage the inefficiency?

The triple-double machine finished 76th in fantasy last season but Westbrook’s stats will point out he was second overall when punting all three efficiency stats. If you’re confident you can build a lineup with nothing but ‘chuckers,’ go wild, but pigeonholing yourself into counting stats leaves you little margin for error in the rest of your draft.

Thompson hasn't seen an NBA game since the 2019 Finals, and we're all rooting for him to get back to the player he was before two devastating injuries. However, Klay has an ADP in the top-100, and this is unwarranted even with an IR spot. He reportedly won’t return before 2022, and the Warriors will take their time bringing him along when he does. Golden State's sole goal is to have the old Klay back for the playoffs, so the juice isn't worth the squeeze here.

Graham’s production from two seasons ago continues to buoy his ADP higher than it deserves. In 2019-20, Kemba Walker was dealt in a sign-and-trade for Terry Rozier, leaving a void at point guard. Graham meteorically rose from 4.7 PPG to 18.2 PPG and ended that season fifth in Most Improved Player voting. While he answered the call for the 23-42 Hornets, his field-goal percentage only improved from 34.3 to 38.2, still well below league average.

As his role diminished last season, he fell outside the top-120 in fantasy. New Orleans acquired him to be their starting point guard but he’s not their leader. I count four players (Williamson, Brandon Ingram, Jonas Valanciunas, Nickeil Alexander-Walker) who are ahead on the pecking order and without the volume, Graham won’t produce enough value elsewhere to justify his current ADP.

Alexander-Walker has every opportunity to succeed as a starting guard in New Orleans with Eric Bledsoe and Lonzo Ball no longer in town. His skill set complements Zion Williamson and Brandon Ingram, and there were signs of progress at the end of the 2020-21 season before a high ankle sprain forced him out for the majority of April: 17.6 points, 5.1 rebounds while attempting 8.8 triples in nine games prior to the injury. Alexander-Walker will have a licence to shoot with creators around him, so count on points and threes from the Toronto native with some sneaky stocks (1.3 steals and 0.5 blocks this preseason).

Drafting a rookie in fantasy hoops always carries a risk, but there have been enough success stories over the previous four seasons to warrant it. Twelve players have finished in the top-100 and half of them were power forwards or centres.

The preseason has answered some key questions regarding Mobley’s outlook. Cleveland looks committed to starting him beside Jarrett Allen. They’ve been experimenting with Lauri Markkanen at the three which could loosen the logjam upfront.

In terms of his performance, Mobley has attempted 25-of-36 field goal attempts at the rim, which bodes well for his field-goal percentage. Add in the athleticism he’s showing as a help defender beside Allen and it’s easy to see him being a near double-double, 2.0 BPG kind of asset.

Poole will finish the season second in points behind Steph Curry for Golden State.

While Thompson is back at practice with the team, reports are suggesting he won’t return until early 2022 as mentioned above.

Preseason is still just the preseason, but you can’t fake buckets. Poole has shot 52-44-90 in three games averaging 25.0 PPG in 23.4 MPG. From an eye test perspective, he’s got the confidence, aggression and bag of tricks to create his own offence. It’s not like Poole emerged out of nowhere either. Over 11 games in the NBA G league, he was second in scoring at 22.4 PPG.

Kevon Looney and Draymond Green are great in their own ways, but the scoring burden will ultimately fall on the shoulders of Poole and Curry.

I like Bane as a late-round target in deeper leagues. He's sparkled in the preseason: 13.5 points on 50 per cent from the field and 43.5 per cent from three, hitting 2.5 triples. The sophomore is a fluid shooter, and I bet head coach Taylor Jenkins makes him a starter on opening day with Kyle Anderson sliding to the bench. Bane is essentially going undrafted, so there's little risk involved with taking a flier on him.