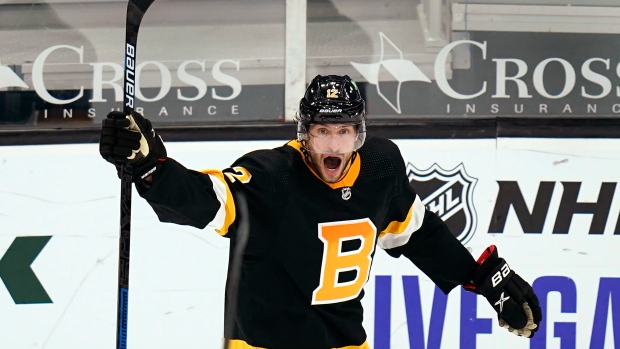 The NHL regular season is back and the first week is in the books.

To no one’s surprise, Connor McDavid picked up right where he left off with five points through his first two games, including a hat trick against the Calgary Flames on Saturday night.

It took McDavid exactly two games to record his first hat trick last season as well. What more can you say? If you had the first-overall pick, enjoy the ride.

For most players not named McDavid, it’s important to take first-week performances with a grain of salt. It’s also important to react, but not overreact.

Andrei Vasilevskiy isn’t going to have a save percentage below .900, while Tyler Bertuzzi isn’t winning the Rocket Richard Trophy.

However, we can attempt to predict some potential breakouts from the group of hot starts. As always, it is our duty as fantasy managers to look at the weekly schedule and take advantage of streaming options to help boost our counting stats each week.

The Ducks, Red Wings, Islanders, and Blues will each play four games. The Hurricanes, Stars, Senators, and Lightning each play two games.

Both the Bruins and Golden Knights are part of the three-game group, however all their games come on off nights, which means you can maximize your roster space with some additions.

For quality streaming purposes, I favour the Bruins. If you’re looking for quantity, look no further than the Islanders.

They play four games, with three of those games coming against the Blackhawks, Blue Jackets, and Coyotes. All three of those teams were in the bottom 10 in goals allowed per game last season.

Grzelcyk is only rostered in 13 per cent of ESPN fantasy hockey leagues at the moment. He’ll give you some hits and blocks, plus he sees time on the second power-play unit and could chip in offensively.

Smith is a solid dart throw as well. He played on the second line with Taylor Hall and Charlie Coyle in the team’s lone game in week 1 and saw time on the second power play unit. He’s available in more than 90 per cent of leagues.

Palmieri is in the best situation for fantasy purposes: first line and first power-play unit. He kicked the year off with two assists in the season opener before the whole team was basically shut down in the second game against the Panthers. Look for Palmieri and the Islanders to bounce back in week 2 with three great matchups in four games.

Stephenson finished last season strong with 15 points in his last 18 games, playing close to 20 minutes per game. That hot streak has carried over to the early part of this season. Stephenson has two goals and three points through two games playing on the top line. Unfortunately, both of his linemates are dealing with injury. Max Pacioretty is week-to-week with a broken foot while Mark Stone is day-to-day with a lower-body injury. Despite that, Stephenson’s spot on the top line is solidified, and he may see a bump in power-play ice time with the big guns sidelined. He’s set up to succeed.

Jeff Carter has been a fantasy stud since joining the Penguins at the trade deadline last season. He had nine goals in just 14 games to finish off the regular season and added four goals in six postseason games. Admittedly the 53-goal pace to end last year is unsustainable, but it gives you a good look at just how productive he’s been with the Pens. With Sidney Crosby and Evgeni Malkin on the shelf to start the year, Carter has been relied upon with top line, first power-play unit duties, and he’s responded with four points in three games. Even when Crosby returns, Carter should take line two duties alongside Kasperi Kapanen and Jason Zucker, where Carter did most of his damage at the end of last season. I’m adding, and I’m holding.

Unfortunately, Nathan Mackinnon had another positive Covid-19 test and won’t travel with the team as they begin a three-game road trip Tuesday. Nazem Kadri was vaulted into top-line centre duties in Mackinnon’s absence and produced at an elite rate with four points through two games. Kadri is coming off a disappointing year with just 32 points in 56 games, but keep in mind his shooting percentage was an absurdly low 6.5 per cent, almost half of his career 11.7 shooting percentage heading into last year. I’m expecting a bit of a bounce back for Kadri. Whether he’ll be worth holding beyond the Mackinnon absence remains to be seen, but for now, he needs to be rostered in all formats while centering that elite top line in Colorado.

Jared McCann broke out in the back half of last season. He put up 22 points in the final 24 games with the Penguins while playing behind the big names up front. He’s now leading the way in Seattle, centering the top line and top power-play unit. Through the franchise’s first three games, McCann has two goals and three points. He’s proven he can produce at an elite rate, and he’s now getting every opportunity to show it. I’m adding where I can to see where this goes.