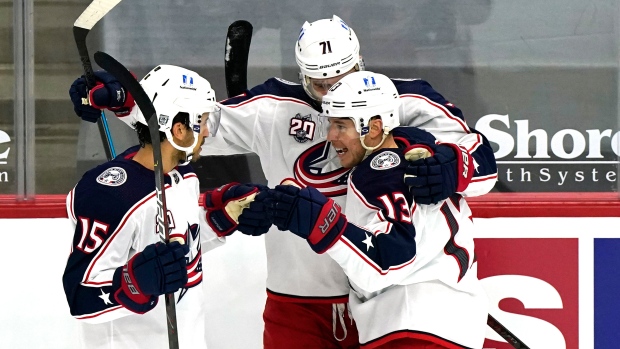 The NHL had 12 more COVID-19 related postponements in Week 4, bringing the total up to 35 affected games through four-plus weeks of action.

As of Monday morning, only one game has been postponed for the upcoming Week 5, with the New Jersey Devils and Boston Bruins no longer playing on Monday.

That means the rest of the teams could enjoy a full slate of games, and fantasy owners can enjoy a healthy amount of man games for the first time in weeks.

Sixteen teams are schedule to play four games in Week 5 - that’s more than half of the league. The Maple Leafs and Flames have the most favourable matchups.

The Leafs play the Senators three times to start the week, and finish off with the Habs on Saturday. Obviously the top guns are rostered in every league, but there is still value to be had lower down the depth chart.

Jason Spezza is averaging just 10 minutes of ice time per game, but he still has a respectable eight points in 14 games.

Ilya Mikheyev has recently been playing on a line with John Tavares and William Nylander and has produced two points in his past three games.

Both Spezza and Mikheyev are widely available in fantasy leagues and worth a look with three games against Ottawa on deck early in the week. The Sens are allowing a league-high four goals per game this season.

Both series should be high scoring, with Vancouver and Edmonton both among the top 10 in goals allowed per game.

Both are rostered in less than 15 per cent of leagues and have a shot at contributing in these favourable matchups.

Blues winger Vladimir Tarasenko was back on the ice with his teammates on Friday, and although GM Doug Armstrong clarified Tarasenko is still “weeks away” from returning to action, it wouldn’t hurt to check if he’s available in your league.

He’s rostered in just 63 per cent of leagues.

Cam Atkinson has been on fire since he joined Jack Roslovic and Patrik Laine on the Jackets’ top line. The 10-year veteran has seven points in his past three games, including a pair of shorthanded goals, and was likely one of the top-ranked players this past week in most fantasy leagues. Atkinson was actually a bit of a fantasy afterthought this year mostly due to his subpar 2019-20 season where he totalled just 12 goals in 44 games. Remember though, he’s just two years removed from a 41-goal season. It would be foolish to expect Atkinson to return to that elite-level scoring pace, but there are some promising signs that last year was more of a fluke and not necessarily a permanent fall from grace. First of all, his shooting percentage was a career low 8.1 per cent last year, an indication he was unlucky. He also played a minute and a half less per game last year compared to the 41-goal season, which is a major production killer. This season, Atkinson’s shooting percentage has returned to a very sustainable 12.8 per cent, which is just slightly above his career average, and the ice time over his past seven games, mostly on that top line, is back up to 19:15 per game, almost exactly the same average time on ice from his 41-goal season. He’s still available in over 60 per cent of leagues.

Justin Faulk is playing a whopping 24 minutes a game with Alex Pietrangelo no longer in the mix. The result has been a very solid start to the season for the veteran. Faulk has eight points in 15 games, and is leading the league with a plus-16 rating. He’s also in the top 10 in hits with 46. He was recently bumped up to the top power play unit over Torey Krug, and has had some success there. All signs are pointing to Faulk maintaining his fantasy relevance, even in leagues without hits as a category.

By now we know exactly who Jordan Staal is. He’s an extremely valuable hockey player, but has never been the greatest producer for fantasy leagues. That’s changed early on this season, and mostly due to his power-play opportunity and production. Staal is currently playing on the top power-play unit. His 14.47 power play points per 60 minutes is second in the league among players with at least two minutes of power-play time a game. The increase in production has led to 12 points in 10 games, with five of those coming on the man advantage. The power-play pace will come down (Connor McDavid led the league with a 10.37 PPP/60 last season), but for now it’s time to ride the hot hand and the hot power play, while also cashing in on the extra hits and faceoff wins he’s always provided.

Teuvo Teravainen has just three points in nine games, with two of those coming on opening night. That means he’s been held pointless in 78 per cent of his games this year. That happened in just 40 per cent of his games last year. The only thing you can do is wait. His shooting percentage is at an absurdly low 5.3 per cent compared to a career 10 per cent, so we can expect that to correct itself. Teravainen is also still playing on the top line with Sebastian Aho, which should see more production. The problem so far is a two-minute dip in ice time per game from a season ago, and less time on the power play, getting second unit usage. He’s a hold, and a hope that this is just a brutal 10-game slump.