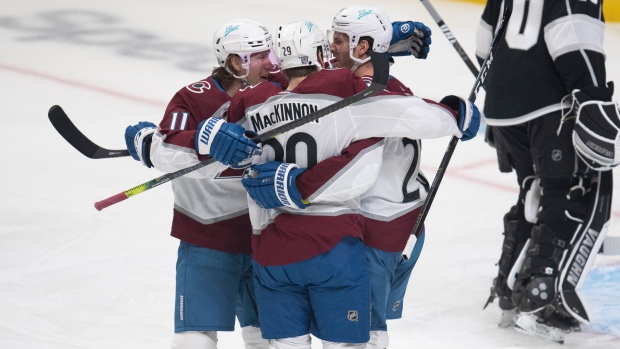 The first six weeks of the fantasy hockey season are in the books, meaning that most leagues have reached the halfway point of the regular season.

It’s been an odd year, and we’ve all had to adapt in one way or another.

One thing that remains constant is the necessity to narrow in on the schedule each week and take advantage of this year’s unique setup.

Week 7 is a full slate with a season-high 22 teams – more than two thirds of the league – scheduled to play four games apiece.

The games will be spread out as well.

The lowest number of games on any given day is six, coming on Wednesday and Friday, while the busiest nights come on Thursday (10 games) and Saturday (12 games).

This is great for hockey fans and fantasy owners looking for the best teams to stream.

The Avalanche have an incredibly favourable schedule this week, with a pair of games against the Sharks coming on the lighter Monday and Wednesday nights, before finishing the week off against the Ducks on Friday and Saturday.

The Sharks are giving up the second most goals per game just behind the Senators, while their penalty kill ranks 21st.

Look for Brandon Saad (24 per cent rostered) to help fill out your roster on the NHL’s light nights.  He had a great two-week stretch in early February where he put up nine points in seven games, but has since followed that up with four straight pointless games. He’s likely been dropped in a lot of leagues. He’s on the second line and second power-play unit, so the opportunity is there with the great matchups.

The Jets had just two games last week, but they’re back in full force with a juicy schedule in Week 7. They’ll face the Canucks on Monday and Tuesday before closing the week out with a pair of games against the reeling Canadiens.

The Canucks are giving up the third most goals per game, while the Habs have lost five straight, giving up more than four goals per game in that span. Look for that trend to continue against the high-flying Jets who rank third in goals per game.

Paul Stastny (14 per cent rostered) is playing on the top power-play unit. He’s been unlucky in that role to this point with just 2 power play points in 66 minutes played. That should correct itself considering the Jets are clicking at a respectable 23 per cent with the man advantage this season. Expect a solid week from the veteran.

After a pair of high-scoring meetings last week, the Flames will play the Senators three more times in Week 7, with the Sens giving up a league-high 3.96 goals per game.

Andrew Mangiapane (11 per cent rostered) started the season off slow, but has since scored eight goals over his past 15 games while averaging more than 18 minutes of ice time. He’s also seeing time on the second power-play unit.

- It’s time to cut loose your fringe Red Wings players. Detroit is the only team with two games in Week 7, and they have just five games total over the next two weeks. Use that valuable roster spot on streamers with a heavy schedule.

- Vladimir Tarasenko (shoulder surgery) was a full participant in Blues’ practice Friday, meaning he took part in contact drills. Head coach Craig Berube said there is a “good chance” Tarasenko will make his return during their current six-game road trip. He’s available in a quarter of leagues at the moment, but that number is shrinking by the day.

Batherson is on fire, playing on the third line with rookie Tim Stützle, and is on the cusp of Senators history. Batherson can tie the franchise record if he scores in his sixth straight game Monday night, joining an impressive list that includes names like Jason Spezza, Dany Heatley and Daniel Alfredsson. Batherson has actually scored six goals in his past seven games. Prior to that, he had just one goal in the season’s first 15 games. We should expect Batherson to by a hybrid of both those players moving forward. In the first 15 games his shooting percentage was 2.6 per cent. He was getting incredibly unlucky. It took him just seven games to raise that percentage up to 13.5 for the season, which is just slightly above his career average, albeit a small sample size. Batherson should continue to put the puck in the net at a decent rate, and has a chance at reaching the 25-goal mark in the shortened season. Not bad for someone you can grab for free.

Zuccarello missed the first month of the season recovering from off-season arm surgery. In his seven games since returning to the lineup, he’s posted three goals and eight assists, including 10 points in his past five games. To say he is red hot would be an understatement. That being said, the production is obviously unsustainable. He’s scoring on 21 per cent of his shots compared to an 11 per cent career average. His on-ice shooting percentage (includes shots by teammates while he is on the ice) is at 20 per cent, compared to a career nine per cent. Maybe playing with rookie sensation Kirill Kaprizov is all he needed to spark a breakout, but the more likely scenario is that he comes crashing down to earth. He’s still only playing at a less-than- elite 15 minutes per game, although that could always grow. He deserves to be rostered while he’s hot, but limit the expectations, and sell high if the offer comes.

Comtois has eight goals through 21 games this season with all eight coming at even strength, and he’s doing so with just 13 minutes of ice time per game. His 5v5 goals per 60 minutes is at 1.81 which puts him eighth in the league (min. 10 games played) right behind Auston Matthews and Tyler Toffoli. His shooting percentage is at an incredibly high 22 per cent, however his career shooting percentage is 20 per cent. He could just be a goal scorer. He did score 31 goals in just 25 games in his last year in the QMJHL two years ago. Comtois is getting more and more intriguing by the game.

Zacha has 13 points in his past 12 games and is loving his time on the second line with Jesper Bratt and the recently returned Nico Hischier (note: Hischier is day-to-day after taking a puck to the face). Zacha is also on the top power-play unit, which has seen some success. The Devils don’t have the best schedule in Week 7 with the Islanders, Rangers (twice), and the Bruins on tap. All three teams are top 10 in goals allowed per game and penalty kill percentage. Zacha is also shooting at an unsustainable 19 per cent, however someone this hot shouldn’t be left on the waiver wire.

Hall has been one of the biggest busts of the fantasy season. He has one goal, and it came on opening night. He’s now gone 18 straight games without lightning the lamp, the longest goal drought in his 11-year career. The good news is he’s at least getting some assists and power-play points, although the minus-13 is already just two off his career worst of minus-15 set in 2013-14. There is some light at the end of the tunnel however. His shooting percentage is just 1.9 per cent, that’s dead last among the 68 forwards with at least 50 shots this season. His career average is 10.2 per cent and he’s never finished below 8.4 per cent in a season with at least 40 games played. There are better days ahead. He’s a major buy low.