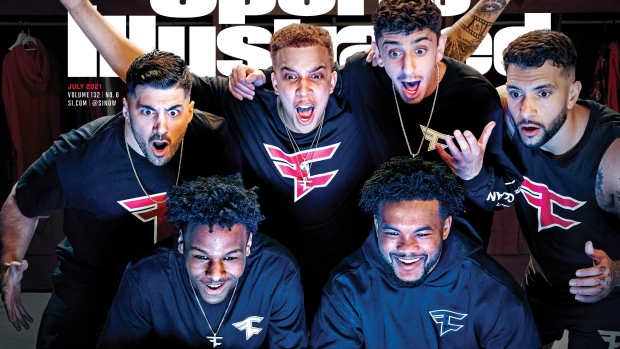 The esports organization FaZe Clan are cover athletes for the July 2021 issue of Sports Illustrated, with members NICKMERCS, Swagg, Rug and Temperr as well as Kyler Murray and Bronny James representing the team.

With their appearance on the cover, FaZe Clan becomes the first esports organization to cover an issue of Sports Illustrated. They are one of the most prominent organizations in all of esports, with current divisions in many games including Call of Duty, Fortnite, Rocket League and more.

The Sports Illustrated story focuses on the growth of the organization into one of the most prominent brands in gaming and esports, as well as lifestyle and entertainment in general.

NICKMERCS, Temperr and Rug are all among the organization's owners, while Murray and Bronny have joined the team as representatives from traditional sports. As the story notes, many athletes from other sports have also expressed interest in FaZe Clan, which is bridging the esports and traditional sports worlds in a way that few groups have done before.

“Guys can relate to them,” NBA star Ben Simmons told Sports Illustrated. “These are fashionable guys, athletic. They are people you would hang with. It’s just so broad. When you see guys who you are able to relate to, connect with and would hang out with outside of video games, that makes it so much easier. And we get to see who these guys are through their YouTube content."