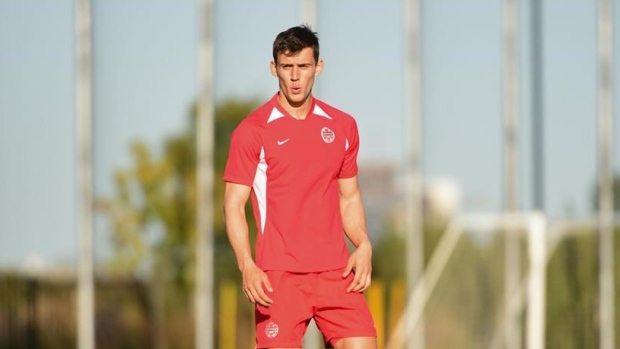 TORONTO — Amer Didic's road to the Canadian soccer team started in Bosnia, with several detours along the way.

Didic's family fled the war in Bosnia and, sponsored by a church, arrived in Canada when Amer was one. His father, a helicopter pilot in the military back in Europe, worked a variety of jobs from Domino's to Walmart to make end meet for his wife and two kids.

"Pretty much coming (here) with nothing," Didic said of the family, which landed in Surrey, B.C., before moving to Edmonton.

Today Didic's father is flying again — transporting tranquilized polar bears back to their native habitat is just one of the commercial helicopter pilot's duties these days — and Amer is on the verge of winning his first cap for Canada.

Canada coach John Herdman summoned the 24-year-old FC Edmonton centre back for Tuesday's CONCACAF Nations League showdown with the U.S. at BMO Field. It's the second senior call-up for Didic, who was also part of Octavio Zambrano's Canadian camp prior to a September 2017 friendly with Jamaica.

More than a few are rooting for Didic.

"Amer has always been incredibly humble, I think that's because of his background, and incredibly hard-working," said Baker University soccer coach Nate Houser. "And he has never been above any of his teammates or the team. He really is somebody you'd like to see do well."

The six-foot-four Didic ended up at Baker thanks to Houser's connection with Ross Ongaro, Didic's Edmonton high school coach. Ongaro, who has a lengthy and distinguished soccer resume, had coached Houser in an indoor soccer all-star game back in the late '90s and the two had stayed in touch.

Ongaro invited Houser up to Edmonton, telling him he had two players to showcase.

"One was Amer. And what was crazy is that he had been told by a number of bigger schools they just didn't think he was ready or wasn't going to turn out," Houser recalled. "And I thought he was a no-brainer.

"You look at his physical talents, his technical talents, the way he can drive a ball, receive a ball. I was fortunate that a lot of other people couldn't see what he had inside and that Ross put me on to him."

So sight unseen he ended up at the small school in Baldwin City, some 30 minutes outside of Kansas City.

"I showed up first day. There was one stoplight in the whole city," Didic said with a smile. "Just land everywhere and then just a small school in the middle of it.

"But it is a great school. It grows on you, that's what people say when you first go there," he added. "It's small so you form really good relationships."

At Baker, he scored 28 goals in 84 games despite being shifted permanently from midfielder to centre back. He was a two-time NAIA All-American and earned NSCAA All-American and Heart of America Athletic Conference Player of the Year honours as a senior in 2015.

Didic proved dangerous on set pieces both as the provider and target man. From a young age, Didic used to feed his father — who coached him as a youth — for volleys and so is quite at home taking a free kick with either foot.

"My whole childhood I remember is just me and him playing," said Amer.

Didic was offered a tryout with the Swope Park Rangers, Sporting Kansas City's USL affiliate, as a senior at Baker.

"I wasn't too sure if the pro game was something that was available to me," he said. "Luckily my (college) coach had some connections with Sporting Kansas City."

Marc Dos Santos, now coach of the Vancouver Whitecaps, was in charge of Swope Park at the time. Didic went on to make 32 appearances for the Rangers during his first pro season in 2016, earning USL All-League First Team honours as a Defender of the Year finalist after appearing on USL's Team of the Week a league-high six times.

He also played three CONCACAF Champions League matches for Sporting Kansas City, making his debut in Trinidad, where he had to mark former Southampton and Sunderland striker Kenwyne Jones.

Didic signed with Sporting Kansas City in 2017 — the first Baker University men's player to join an MLS team — but didn't see any league action. And he represented Canada at an under-23 tournament in Qatar.

Kansas City did not exercise his contract option after the 2018 season and Didic, after seven years in the Kansas City area, signed with San Antonio FC of the USL. It did not turn out to be a good fit and he left two months later to rejoin FC Edmonton.

His success with Edmonton and national team call-up come in a year in which he's had to battle a groin injury. Off the field, he became an uncle but that celebration was tempered by the fact that his sister, with whom he is very close, is fighting some medical issues.

"She'll find a way, I know her," said Didic. "It's been a good year in terms of being home with the family and playing soccer here at home. But you also have that in the back of your head every day, you're thinking about her ... It puts everything in perspective."