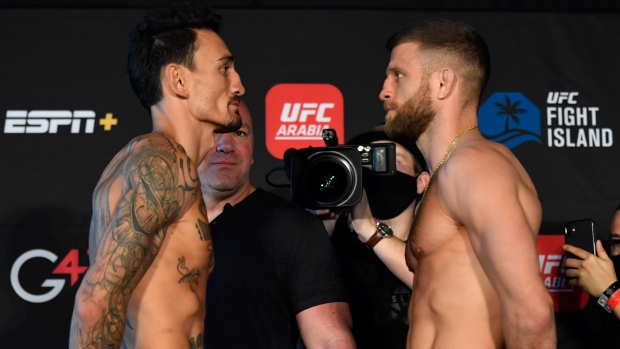 Former featherweight champion Max Holloway and rising contender Calvin Kattar will meet on Saturday in the UFC’s first main event of the year as the promotion makes its return to Fight Island to kick off the 2021 campaign.

Holloway, fighting in his first non-title bout since 2016, will be looking to snap a two-fight losing streak. The 29-year-old dropped the featherweight title to Alexander Volkanovski at UFC 245 and then lost the title rematch at UFC 251 last July.

On the subject of his most recent loss, Holloway does not agree with the judges, who awarded his opponent a split decision victory, and told TSN that he is not the only one that shares that opinion.

“I can’t be mad about that last fight, 80-to-90 per cent of the people thought I won and it’s not just fans, these guys are coaches,” said Holloway.  “[Georges St-Pierre]’s coach Firas [Zahabi], Big John McCarthy, the guy who made the rules.  My competitors, Dustin [Poirier], Jorge [Masvidal], Justin [Gaethje], Nate [Diaz], all these guys [are] backing me, so at the end of the day, it is what it was you know? I can’t be too mad about it - you live to fight another day and you’re on to the next.”

Despite the two losses, Holloway remains the No. 1 contender in the division and has championship pedigree. After unifying the featherweight belt against Jose Also, Holloway successfully defended the gold three times, before dropping it in December of 2019.

Kattar enters the bout on a two-fight winning streak with victories over Jeremy Stephens and Dan Ige.
The No. 6-ranked featherweight contender has won 14 of his last 16 bouts and believes that a victory over Holloway in Saturday’s main event would vault him directly into the title picture.

“He’s the No. 1 contender, most people still consider him the champ, so a win over him puts you next in line,” Kattar told TSN.  “Also, the division has been at a standstill in the previous months and he’s the only one that hasn’t had anything booked or lined up and was available, so we thought it made the most sense and a lot of upside with this one and we’re excited.”

Also making his return on the first card of 2021 is last year’s breakout star Joaquin Buckley, who will be looking to add another highlight reel knockout to his resume as he faces Alessio Di Chirico.

Buckley announced himself on the scene with a spinning back kick KO of Impa Kasanganay that went viral and was an easy choice for knockout of the year in 2020.

He followed that performance with another vicious KO victory over Jordan Wright to cement his place as a must-see fighter.

Buckley has won four of his last five fights and is well on his way to transitioning from highlight reel artist to legitimate contender.

Di Chirico is looking to bounce back from three consecutive losses, most recently to Zak Cummings at UFC Fight Night: Smith vs. Rakic last August.

Following his victorious return last October after two years, veteran Carlos Condit will face another veteran, Matt Brown, who is looking to bounce back from a loss to Miguel Baeza.

There will be a limited number of fans in attendance.