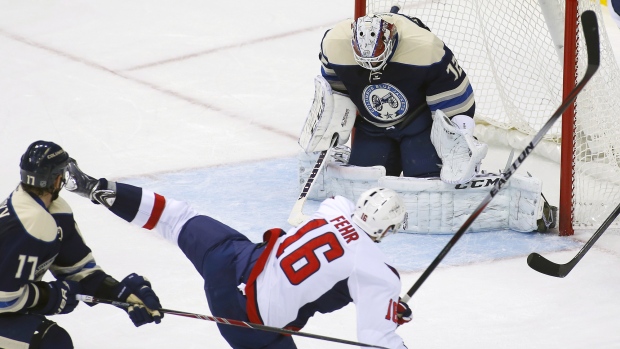 COLUMBUS, Ohio - The Washington Capitals made sure this one wouldn't get to a shootout.

Eric Fehr scored 42 seconds into overtime to lead Washington to a 5-4 victory over Columbus on Thursday night, extending the Capitals' point streak to seven games and snapping the Blue Jackets' winning streak at seven.

Just two nights earlier, the Capitals lost an NHL-record, 20-round shootout at Florida.

Mike Green skated past the goal line on the right wing and slid a centring pass to Fehr, whose quick shot beat Sergei Bobrovsky for the winner.

"That was a big one tonight for our team, the way we fought back," said Fehr, who notched his seventh goal of the season. "We were resilient. We could have folded a few times but we hung in there and got the win."

Joel Ward, Jason Chimera, Karl Alzner and Troy Brouwer also scored for the Capitals, 5-0-2 in their last seven games — including a shootout loss to the Blue Jackets a week earlier. Braden Holtby had 22 saves.

The Blue Jackets took their first lead 52 seconds into the third when Nick Foligno scored his second by jamming in a rebound off a backhander by Jeremy Morin. It was Morin's first point for the Blue Jackets in his first home game with the club.

Michael Chaput scored his first NHL goal in his 27th career game to put Columbus up 4-3 with 4:25 left, from a hard angle after a long shot by Matt Calvert.

But the Capitals tied it again with 3 minutes remaining when Green's backdoor pass went in off the left skate of Brouwer. The goal was confirmed by video review.

Alzner and Chimera each had an assist to go with their goals, and Green and Michael Latta each had two assists.

"They knocked us down and we got back up," Latta said. "This is the kind of resilience we've talked about. We're never out of it, obviously, (because) this team has so much firepower."

Foligno had an assist to go with his two goals, and Jack Johnson also tallied for the Blue Jackets, who fell one short of tying the team's longest winning streak.

"We've got to look at the positives right now," said Foligno, who had a career-high 18 goals in 70 games last season and already has 16 in 30 this season. "We just need to find a way to hold onto that lead and to have a little bit better start."

Columbus went past regulation for the fifth straight game and for the sixth time in seven.

"I'm disappointed the way the game ended because we had two leads, two opportunities to earn a win in regulation," coach Todd Richards said. "It leaves you with a bitter taste."

NOTES: The Blue Jackets set the franchise mark with eight wins in a row in January. ... The Capitals had killed 13 of 14 penalties during the previous six games before the Blue Jackets scored on their first two attempts. ... Washington improved to 4-6 in overtime. Columbus fell to 5-3.