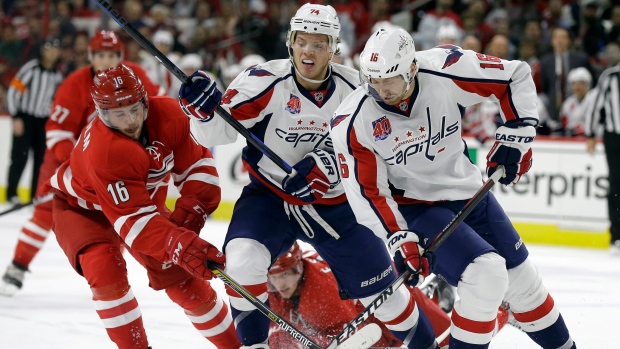 The payoff this time was the game-winning goal.

Fehr scored with 4:02 remaining and the Capitals beat the Carolina Hurricanes 2-1 on Thursday night.

Jay Beagle scored an early goal and Braden Holtby stopped 29 shots for the Capitals. Washington, which had lost two in a row, began a three-game road swing by moving back over .500 at 11-10-4.

"It's great for the confidence," Fehr said. "It makes for a happy plane ride and that's the stuff that can really build into big streaks."

Alexander Semin scored his first goal of the season for the Hurricanes. The Eastern Conference's second-worst team was trying to win two in a row for the first time since early November.

"Obviously, we're in a little bit of a hole we've got to climb out of," captain Eric Staal said. "Against divisional teams, you want to get the two points, especially at home. ... For the most part, we were ready to play."

Fehr made the key play all by himself. He poked the puck away from Riley Nash just inside the blue line and scooped it up, charged between the circles and snapped a shot past Anton Khudobin.

"I definitely take a lot of pride in keeping pucks in the zone, knocking pucks away," Fehr said. "This time it worked out and I was able to retrieve it and get a big goal."

Khudobin finished with 26 saves for Carolina.

The Capitals had lost four of their last five while allowing a combined 15 goals in those defeats. But they always seem to find a way to play tense games against Carolina — 19 of the last 32 meetings have been decided by one goal.

Washington played a mostly tight defensive game in this one in front of Holtby, who took a bid for his second shutout of the season into the third.

Brooks Orpik came up with two blocked shots in about 20 seconds, including a big one against Semin with about a minute left.

"They like to play a wide-open style," Holtby said. "I think we minimized them a lot and held our ground as best we could to earn that close game."

Semin had given the Hurricanes a jolt of momentum earlier in the final period when he tied it with his long-awaited first goal.

The former Washington forward took a nifty pass from Jay Harrison and beat Holtby with a backhand for the 500th point of his career. Coach Bill Peters said Semin's game began to make a positive turn last week in a win at Pittsburgh.

"He's working hard with and without the puck," Peters said, "and that's what you have to do."

Beagle had put the Capitals up 1-0 after a Carolina misplay just 2:19 in. Khudobin stopped Jason Chimera's shot from close range but Beagle poked in the rebound.

That was a good sign for Washington, which improved to 10-1-1 when scoring first.

NOTES: The Hurricanes skated without G Cam Ward (lower body) and called up Drew MacIntyre from Charlotte of the AHL to back up Khudobin. ... Another of Ward's former backups was in the building: G Justin Peters didn't play behind Holtby. ... Carolina D Andrej Sekera, hurt when blocking a shot Tuesday night against Nashville, also was scratched.