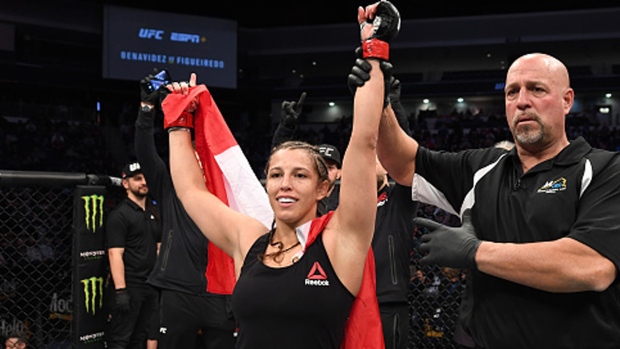 Canadian Felicia Spencer’s entire UFC career has taken place since the last time Leah Letson, her opponent on Saturday at UFC Fight Night: Holloway vs. Rodriguez in Las Vegas, competed in the Octagon.

Spencer made her winning debut against Megan Anderson, went the distance in a loss to Cris Cyborg and dropped a title fight to Amanda Nunes at UFC 250 all since Letson’s split decision victory over Julija Stoliarenko at the Ultimate Fighter 28 finale in November of 2018, her only UFC outing.

The Montreal native admits that it can be hard to plan for someone that hasn’t fought in a long time, but intends to stick to her own game plan in the main card bout.

“It’s kind of exciting in a way, obviously the challenges are, where has her growth happened? Three years of training can change you a lot,” Spencer told TSN.  “At the same time I’m excited to have my mindset focused on what I’m doing and just implementing my game plan, making it happen because I don’t really care what she’s going to try to do. It’s definitely a little different in preparation.”

Spencer’s last bout was a split-decision loss to Norma Dumont on a May Fight Night card. The 30-year-old admits to feeling flat that night, something she has corrected heading into Saturday’s fight.

“I felt maybe a little bit less excited in that moment,” said Spencer. “I don’t want to say that I didn’t necessarily care about the outcome, but It felt like I was kinda just going through the motions a little bit to get through it. After experiencing that and kinda feeling after the fight that I was so blase about it during the fight, definitely motivated me to bring that intensity to training and to bring the intensity back to the fight and I’m genuinely excited about the fight and me being fun to watch and having an amazing performance for myself.”

There has been lots of conversation about the viability of the women’s featherweight division and whether or not it will continue to exist in the UFC. Aspen Ladd and Dumont fought in a featherweight main event in October, signalling an uptick in fortune for the division.

Spencer is happy with the overall health of the division and the part she’s played in keeping it going.

“I feel really good about it,” said Spencer. “I feel proud that I was a part of the division to get to this point and I have a good feeling about it staying, you know sticking around and it feels nice to have been a part of that journey.”

Two-time Olympic gold medallist and undefeated MMA fighter Kayla Harrison is a free agent and could possibly be signed to add more star power to the featherweight division.

Spencer would welcome Harrison or any other addition, but says the division is still powered by the champion.

“I think she’s an amazing athlete and whatever’s best for her career, she should do,” said Spencer. “I understand all the talk from Dana’s side and people talking about what Dana has been saying, the back and forth. For me, I feel like this division really relies on Amanda Nunes more than Kayla. I feel like, if Amanda wasn’t here, maybe now if things change and Amanda wasn’t here I think there might still be a division, but a year ago it would have definitely been a different story.  For me it all hinged on Amanda to allow the division to stay. I hope that they sign new athletes and keep building the division and make it exciting and make people want to watch.”