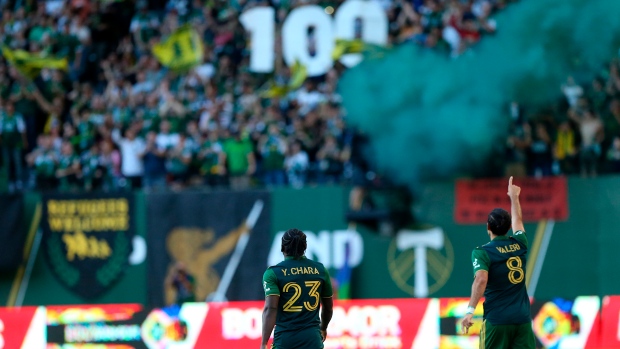 PORTLAND, Ore. — Felipe Mora scored in stoppage time to give the Portland Timbers a 2-1 victory over Los Angeles FC on Wednesday night.

Diego Valeri opened scoring for the Timbers in the second minute with his 100th career goal. But LAFC (6-5-3) tied it in the 16th on Carlos Vela’s fifth goal of the season.

Mora, who came off the bench in the 74th minute, scored amid a scramble by both teams in the final moments. He got an assist from Sebastian Blanco, also a second-half sub who has been working his way back from injury this season.

“I feel really happy for (Blanco). We talked about it, while we were on the bench, about passing,” Mora said through a translator. “It was a great pass that he centred to me and it was a great goal.”

“Overall if you take the beginning out and then the end, we played well. But that’s not how that works, unless you take advantage of more of the advantages that you create, then your margin to take three points becomes too small," LAFC coach Bob Bradley said.

With Wednesday's victory, the Timbers sit on a two-game winning streak heading into a match Saturday at Minnesota United.

Valeri, who joined the Timbers in 2013, is the team's top goal scorer.

“This is really special for me, here with these colours. It’s not easy. I’m very happy about it, and I’m obviously happy about winning tonight,” Valeri said following his milestone goal “It means that I did my best,” He said. “I’m always trying to be better as a professional, in my role, trying to be what the team needs. So its really special for me to achieve this in this jersey, these colours.

The Timbers were without defender Claudio Bravo and midfielder Eryk Williamson. Bravo, is with Argentina in the Tokyo Olympics, and Williamson with the U.S. national team in the Gold Cup.

Timbers coach Giovanni Savarese said getting the last-minute victory before a capacity crowd after many of the Timbers earlier games had restricted attendance was special.

“It was a magic night because we really played well and we got a very good result,” Savarese said. “When our fans are in full capacity, you can sense the passion, you can sense the energy. Just the celebration at the end was incredible.”