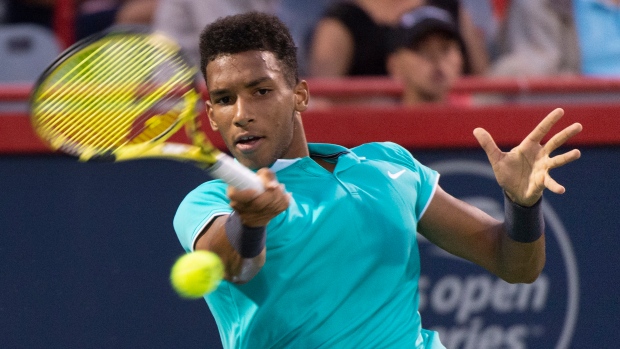 MONTREAL — Felix Auger-Aliassime moved into the third round of the Rogers Cup after countryman Milos Raonic was forced to retire from their all-Canadian matchup for medical reasons on Wednesday night.

After losing the first set 6-3, Raonic got his back worked on by a trainer midway through the second.

The 28-year-old from Thornhill, Ont., battled to take that set by the same score, but after speaking with a doctor he shook hands with Auger-Aliassime in front of a disappointed crowd at IGA Stadium.

Ranked No. 21 in the world and set to turn 19 on Thursday, Auger-Aliassime picked up his 30th win of the season and improved to 14-4 over his last five tournaments.

Aliassime broke Raonic in the fourth game of the first set to go up 3-1. But Raonic, the top-ranked Canuck at No. 19, returned the favour in the second set when he broke the teenager for a 3-1 edge.

Raonic, who's had his season and career plagued by injuries, called for a trainer to look at his back during a changeover up 4-1.

He returned to action following on-court treatment, but was noticeably labouring in falling behind 0-40 before rallying to go up 5-2 on the way to evening the match.

But after a brief conversation with the doctor, that would be it for Raonic, who had played just 10 events in 2019 prior to Montreal thanks to back and knee problems.

He withdrew from a semifinal against Auger-Aliassime in Stuttgart back in June and has yet to finish a tournament healthy this season.