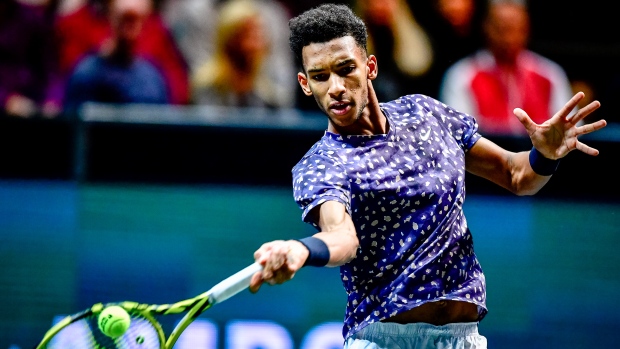 Felix Auger-Aliassime isn't quite sure what to expect as he returns to competition this weekend at the Ultimate Tennis Showdown in France.

"It'll be fun just to get out there and test myself whoever I'm going to play," said the Quebec native, who will turn 20 in August. "It's a new competition and I'll be interested to see how I can deal with this format."

UTS is the brainchild of Patrick Mouratoglou, the long-time coach of Serena Williams, who is aiming to attract younger fans to the sport by speeding up the pace of play and experimenting with rule changes. Each match is made up of four 10-minute quarters with players alternating serve every two points. The player with the most total points wins the quarter. If they split the quarters then it goes to "sudden death" with the first player claiming consecutive points – alternating serve every point – winning the match.

"There's been good feedback on the competition so it's good to see and good to maybe get new fans or different type of fans into the sport," said Auger-Aliassime, whose home in Monaco is a 45-minute drive from Mouratoglou's academy where the event is being played. "It's a good period to try it out and hopefully I can put on a good show."

There is a relaxed code of conduct with players encouraged to show personality and even interact with each other. Coaching time outs are allowed and both players must do television interviews following each quarter.

"I've always shown my real personality so in terms of that people will probably see the player they've always saw," Auger Aliassime said. "Because of the coaching they'll be able to see how I talk with my coaches during the match and the interviews that are being held after each set will be interesting for the fans to see."

The most radical change is the introduction of UTS cards with each player able to choose two to use per quarter. There are six options:

1. Minus-one serve: Your opponent gets one serve instead of two.

2. Win in three shots maximum: When a player uses this card, his opponent is only granted three shots to win the next point. The serve or return counts as one of the three shots.

4. Winners count for three: For the player using this card, winners will be worth three points.

5. Steal serve: When a player uses this card, he's entitled to serve four points in a row.

"That brings an extra tactical side of the game," observed Auger-Aliassime. "The cards will be a big advantage if you're able to use them well so I'm going to be interested to see if I can be clutch and use them well."

How much is each #UTShowdown card impacting the expected points a player will earn over two points?

Auger-Aliassime, who hasn't played in a competition since February in Acapulco, was scheduled to take part in the first edition of UTS in June, but sustained a minor ankle injury on the eve of the event and had to pull out. In UTS2, he's been given a direct berth in the semifinals. Auger-Aliassime will play World No. 7 Alexander Zverev​, the other top seed, on Saturday at 2:30pm et on TSN2 with the winner earning the right to choose his semifinal opponent.

The other semifinalists are being determined through round robin group play, which started last weekend. In Group A, Richard Gasquet and Feliciano Lopez, who are 2-0, will face-off with a semifinal spot at stake. In Group B, all four players – Benoit Paire, Corentin Moutet, Fernando Verdasco and Dustin Brown – are 1-1 and all still have a chance of advancing.

The semifinals are set for Sunday at 11am et also on TSN2. The men’s championship match will air via tape delay at 8pm et on TSN2.

After playing in UTS, Auger-Aliassime will be setting his sights on the US Open and the resumption of the ATP Tour. In an interview with TSN this week, the World No. 20 revealed how he's been improving his game during the pandemic pause and also described his approach to social justice issues and the Black Lives Matter movement.

It's been a long time off between competitions, what have you been up to?

"I've been doing a lot and not that much at the same time. I've been training every day. I've been keeping up with my routine, training six times a week, so the training has been good, pretty intense. Now, as we're seeing the tournaments are possibly coming back soon, the training is slowing down a little bit. I've been good and healthy since my ankle injury and playing better and better."

Auger-Aliassime on improving his game, US Open plan and BLM. MORE: https://t.co/R0xERv8M0z pic.twitter.com/3SCm87zJYw

What are you trying to improve?

"Well, it's tough, because it's such a long period. The physical work has been done in March, April and May and more recently I've been still working physically, but there's more tennis and more practice points. I'm trying to not put too much pressure on the result. I'm trying to see how I can play the good way for me, which is an aggressive way and going for my shots. I've been trying to come forward a little more and mixing it up, trying different strategies against the players I'm playing with. It's just little adjustments every day that I try to do to be as efficient and make the best decisions on court and be the best and smartest player that I can be. There hasn't been one exact thing, but there's been multiple things that I've been trying to do better every day and, honestly, it's been working well."

No days off for @felixtennis! 💪🏿

A couple analysts I interviewed pointed to your second serve as an area in need of improvement. Has that been something you worked on?

"Yeah, for sure, I did. And it's been working well. Obviously, there's no guarantees of results on court, but I'm very confident that I've been making some great progress in that area. Obviously, it's no secret, everyone's seen that I've struggled with it in some periods last year when it was either windy or different conditions, but I feel like now it's getting more and more consistent. I've done some good adjustments and working well in a very consistent way."

What is your plan after UTS and leading into the US Open?

"I've been training a lot, so I'll take a few days off to rest, probably something like three days, and then after that there's going to be maybe a bit more than two weeks before the 'Cincinnati' tournament [being held in New York], which starts on Aug. 22. So, I'm going to train and then probably leave a week before for the United States."

What is your level of concern with travelling in this current environment?

"All the players are in the same position in that they want to see the tournament going, but also are concerned about the cases growing rapidly in the United States so it's kind of a big dilemma. [You're] getting the advice that they're putting out a safe environment for the players and the coaches, but at the same time there are worries not only for us, but for people in general over there. And [there are concerns about] the restrictions on travel and if we can get back to Europe in time without quarantine to come back and play the tournaments on clay so there's still a few things we're not sure on."

What do you think of the United States Tennis Association's plan?

"There's restrictions on site. For now, potentially, you can only have two rooms [at the bubble hotel] with limited staff and with a lot of on-site restrictions that are really needed, you know, to go forward with the tournament. I'll get there and see how it is, but I trust the USTA.​ I trust the governing bodies and that they're putting everything in place to go forward with a safe tournament. The NBA has been able to start again ... and Formula 1 and some football clubs and leagues have started again so I think tennis is a sport that should be able to start again in some form. I'm happy they're putting things in place for us to play again."

What will it be like to play without fans?

"It's going to be challenging, for sure. Honestly, I'm not sure what to expect. We play practice matches without people, but it's such a different type of thing. Also, I feel like playing on a practice court versus playing in a stadium that's empty, it's such a different feeling, you can feel this emptiness around you so that's probably pretty weird. I hope they put things in place to make it better, I guess, for us the players when we're on the court and also the fans to not feel like they're watching something that's kind of empty, but we'll see how it is. I don't know what I'm going into with no fans, but I'll try to play well at least for the fans watching on TV."

After the death of George Floyd and the protests that followed you posted a video on Instagram detailing your dad's experience with systematic racism in Quebec. What role do you see for yourself in the Black Lives Matter movement and in advocating for social justice issues?

"That message was showing one experience that my dad had. I think I was one of the lucky ones as my family was accepted, but obviously, my dad had his challenges when he came to Canada and still sometimes has [challenges] with people who are maybe still not educated enough ... Since then I haven't talked about it that much on social media. Obviously, I see a lot of things going on, but the first thing is to show a good example. It's the actions you're going to do. It's good to talk about it and spread awareness for sure and it's good to ask for justice, but if we can all be – people of colour, anybody, white people – if we can all be good examples for each other and have empathy for each other and look out for each other, that's the best thing we can actually do. It's the actions we put out every day that are going to make a difference. I mean, talking is great, but I have to be a good person when I get on the court. I have to be the best example I can be for the kids that look up to me and that's the best thing you can actually do, be a good example. So, for me, that's the biggest role I can have and the biggest difference I can make."