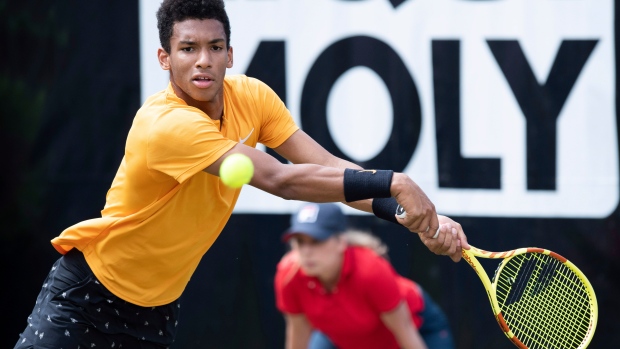 STUTTGART, Germany — Montreal teen Felix Auger-Aliassime is still looking for his first ATP Tour title after a 6-4, 7-6 (11) loss to Italy's Matteo Berrettini in the final of the Mercedes Cup on Sunday.

Auger-Aliassime had his chances in the marathon second-set tiebreaker, but Berrettini fended off five set points before toughing out the win.

It was Auger-Aliassime's first tournament since returning a left abductor problem forced him to miss the French Open.

It was also the first ATP tournament on grass for Auger-Aliassime, who was seeded seventh in Stuttgart. The 21st-ranked rising star previously reached championship matches in Rio de Janeiro in February and the Lyon Open in May — both on clay.

Berrettini won all 50 of his service games during the week in Stuttgart. He did not face a break point against Auger-Aliassime.

The Italian won his third ATP title and his first on grass.

Auger-Aliassime progressed to the final when Milos Raonic on Thornhill, Ont., withdrew ahead of their semifinal due to back problems.